Everyone talks about how sci-fi uses outlandish settings to veil their social commentary. The examples are often laughable, though. I can’t imagine anybody watching Star Trek‘s “Let That Be Your Last Battlefield” and thinking “haha, what a ripping adventure which clearly has nothing at all to do with the civil rights movement!” Star Trek used the sci-fi excuse with people who didn’t understand the show, yes, but it goes deeper than those obvious plotlines. They — the showrunners, writers, actors — took more trouble than that. They slipped overtly-political stories in between wacky-space-hijinx episodes so people wouldn’t get too worried. They even popped a euphemistic gay-rights speech into an episode that was otherwise as boring as an episode can possibly be (“Metamorphosis”). 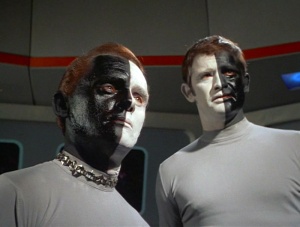 Still from “Let That Be Your Last Battlefield,” showing two aliens with half-black and half-white faces.

There are more examples of how hidden social statements actually worked, but the relevant one at the moment is how slightly-sexualized costumes for the female characters allowed them to disguise how revolutionary those characters’ positions really were. I talked about this way back in May before Comparative Geeks went self-hosted, but I’m now expanding on it because although I covered the recurring characters decently well, some of Star Trek’s edgiest stuff came from its guest stars. My favorites are T’Pau of Vulcan, the Romulan commander, and Dr. Miranda Jones.