Armada by Ernest Cline – A Review of the Book

I recently finished reading Armada by Ernest Cline. You’ve probably heard of Ernest Cline from his book Ready Player One, which is currently being produced with Steven Spielberg at the helm (which almost feels like something out of the book…). Ready Player One is set in a crummy mid-twenty-first century where life in the real world is pretty awful, but life in the virtual reality world is awesome – and that virtual world is full of pop culture references (especially from the 80’s). For more on Ready Player One as it relates to Armada, check back tomorrow for my review of Armada compared to other stories.

Meaning I had to take a step back. Look at the description of the book on Amazon. And think back to how quickly, in the opening pages, some of the initial questions you have about the book are answered. With all of that, I think it’s safe to say that this is  an alien invasion novel… about alien invasion stories. The book, and the main character, are very genre aware as far as that all goes – and, with video games and the idea of drone warfare, your average gamer could also be the next starfighter ace…

Part of why spoilers feel difficult with this book is because throughout, the main character, Zack Lightman, struggles with the question of whether or not what he is thinking is real, or just paranoia or fantasy. I think that comes directly from just how genre aware the novel is. Honestly, how would we feel today if an alien invasion started? If it was similar to something we had seen in a movie, or in a game? If Independence Day just seemed to start happening around us, I don’t know what I would think.

Compounded with this is the fact that Zack’s father also dealt with paranoia and these questions of what was real. His father died when he was young, so he has far more of his father’s pop culture collection and paranoid writings than he has anything else of his father’s.

Keeping that questioning going throughout the novel is pretty good, as it keeps a lot of tension, differentiates Zack (thus answering that question of why is he the narrator and main character), and keeps us asking as well, as the audience, what is true. First person unreliable narrators can do that!

One of the things I reflected on when I was done with the novel is how the whole plot takes place during short a timeframe. This does good things and bad things.

The good is that it emphasizes the really high stakes of, ya know, an alien invasion. There are a number of really emotional moments during the book, and I think some of their emotional power rests in how little time has passed, and in how much has happened. It’s a lot to endure.

It’s also probably frighteningly accurate if we were invaded by aliens who had the technology to make it all the way here… we wouldn’t have a whole lot of time to react or to deal with it. I suppose that’s often the case in these stories, going back even to War of the Worlds – a story that, in the famous radio drama, was indeed able to capture an emotional response from listeners!

The downside to the story happening in such a short time is that it makes you question a bit some of the interpersonal relationships. Emotions are high, there’s shared experience, sure… but you’re still left often thinking, “they barely know each other!” I mean, that point comes up in the book, too. It’s a problem, and it’s hard to handle. Especially with a group of people who were largely strangers before this and who are thrown together. Honestly, movies run into this problem all the time, especially for romantic relationships that just kind of show up after nowhere for two people who have just met…

Which is unfortunately probably also a pitfall in Armada. The weakest character is sadly probably the main female character and Zack’s love interest, Lex. She’s… well, she’s probably a Manic Pixie Dream Girl more than anything else. She and Zack become fast friends when they meet, and then Lex actually ends up in a different location for much of the novel – so all their interaction is long difference. To be fair, though, because so little time passes in the book, of course Lex is more of an idea to Zack than a real person – he barely knows her.

Indeed, many of the other characters feel a bit like stereotypes, but again that’s from the perspective of an unreliable narrator who’s barely met them. So on the one hand it’s too bad, and on the other hand it makes sense. More than anything, this leaves me feeling conflicted about the book in general. 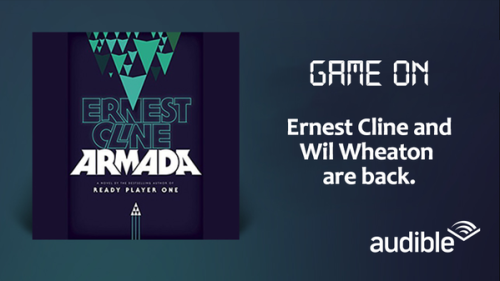 So I actually haven’t read either Ready Player One or Armada – I listened to the audio books, both narrated by Wil Wheaton. Indeed, when I finished listening to Armada I immediately went back and listened to Ready Player One again. Wheaton’s narration is fantastic, and you get the sense as he name drops or quotes pop culture, he knows exactly what he’s talking about. If you’re thinking about getting into either of these books – which I recommend – you should consider the audio books!