I have to start this out by saying that I love Buffy the Vampire Slayer. I watched the show when it first aired and fell in love with it. The characters were so fantastic and the relationship between the original gang was just so much fun to watch. At the same time with all of the things that I love about the show, there were definitely moments where I felt it either went off the rails a bit or just fell flat. In general these moments do not reflect badly on the show as a whole and I will still re-watch.

But there are some things that still just bug me. (Spoilers for Buffy the Vampire Slayer to follow!) 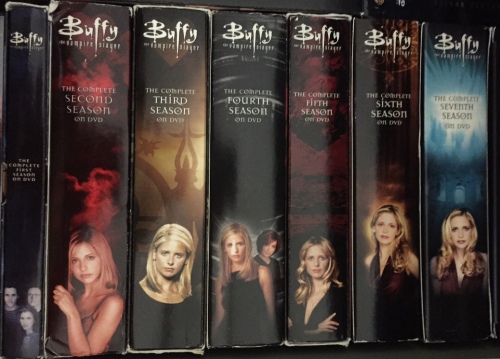 Break Up with Riley

Okay, so this bugged me not because of the break up itself, but because of the relationship in general. Now when Riley was a part of a secret government agency and was fighting alongside Buffy, things were going well. Then when the secret government agency crumbled Riley was left a little aimless. They tried to make their relationship work, but Riley never did well with nothing to do – and on some level I think he resented Buffy’s strength. Then at the very end they make Buffy seem like she is desperate to be with him because she somehow did not notice what a great guy he was. At the same time I always felt that he resented her a bit. The show was never really willing to admit that Buffy and Riley could care for each other, but maybe they were not actually good for each other.

Then instead of just saying that that she was a bisexual, they decided that she was homosexual or a lesbian. So the problem with this is two-fold for me, it basically means that her relationship with Oz was a lie – and it could have been an unknowing lie, but as the audience I felt a bit betrayed by it. Part of the betrayal really does come down to the fact: why couldn’t Willow be a bisexual? Why did she have to be a lesbian? 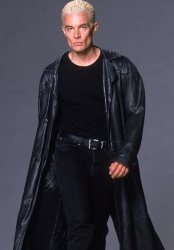 I mean, he’s a bad boy, but come on. Found on http://buffy.wikia.com/wiki/Spike

I am going to start out with a bit of a warning because if you cannot tell from the title this is going to be a touchy subject. There were all types of way that they could have dealt with the horrible Spike and Buffy relationship and how to get it to end, but they really dealt with it in the worst possible way. I remember watching it and it just made my skin crawl.

Then there were arguments about “she is so strong, so she was never in trouble” and some other comments, but at the same time that is not what matters. She was in a vulnerable position and Spike attacked her saying it was love. I know what they might have been trying to show, but the way they chose to do it was just lazy. Honestly I am uncomfortable even saying it because rape is not entertainment or simply a plot device. It is a serious action with serious consequences and it needs to be treated as such with care. In the show it felt like a moment used for shock value, as well as victimizing Buffy – this amazing role model – in order to drive the story for a male character, Spike.

Now these three are pretty big examples and there are probably some others, but these are the big ones that I can think of. Now as with any show there were some bad episodes every season, but these moments are different. They were not necessarily tied to a bad episode or a bad outcome overall, but the moment itself just left a bad taste in my mouth. At the same time it does not mean everything is bad about Buffy the Vampire Slayer. These are things though that I think could have been handled so much better and just made the show that much better.

What moments would you add to this list, if any? And how do you feel about these moments? Let me know in the comments below!