We May Have to Watch More of This… Sesame Street

So we have started occasionally showing the Geek Baby some videos and such online – like Winnie the Pooh per our poll – and then we remembered that HBO bought Sesame Street, and that means we have access to it there.

We’ve watched a bit of classic Sesame Street, and the Geek Baby can’t really sit through a whole episode, so she wanders off a bit into it but it’s fun. Holly and I both certainly get some nostalgia from it.

And then today we put on the most recent episode, last weekend’s Music Magic. And who cares what the Geek Baby thought… we were awestruck. 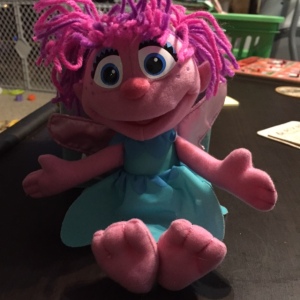 This fairy, in fact.

Good times. And then the episode went on, you know, songs and letters and numbers. These things. Anyway, it continues on to a segment about listening carefully. With Cookie Monster.

“Furry Potter and the Goblet of Cookies,” to be precise, and there’s a muppet of Dumbledore there too with a funny name and it was amazing. There were cute house banners in the background, Cookie Monster doing magic, it was just…

When did Sesame Street become so geeky? I don’t know, but I like it. I think this watching kids’ shows thing might work out for us…