So even though X-Men Apocalypse was the one movie I’ve really been looking forward to this year, I have a confession…

I haven’t seen it yet. P and I instead spent the weekend making a big life-changing decision.

We rescued a dog. We’ve been talking about getting a dog together for most of our relationship, and it was finally a good time to do so. I brought a lovebird into our relationship, but we really wanted a dog too, and so he’s now older brother to our rescue, Frankie (Frank the Tank).

We knew when people were asking what kind of dog we wanted that all we cared about was adopting. I never even looked up breeders. I had no idea in my head of what our dog would look like, which helped. Instead, I envisioned what we would do with a dog and how I wanted him to fit into our family. As we browsed the local humane society’s site, this kept my mind open to every dog and every story. That’s how we found Frankie, and fell in love at first sight.

Frank is a Shepherd/Lab mix with a colorful history. He’s essentially the Tramp from Lady and the Tramp. He’s timid around men, and we suspect he was abused in his past, but so far that’s only made us love him more. We refused to let that past make us look for another dog – we’re patient and willing to give him time and plenty of love to help him overcome it. He’s become my shadow and follows me everywhere. He has his head in my lap, sprawled on the sofa next to me as I write this. We’re still working on learning to play, since he doesn’t seem to have much experience with toys. Fetch is a struggle, but an endearing one. And cuddles are his favorite on rainy days, which we’ve been having plenty of. 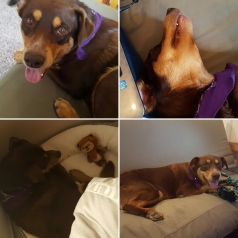 Ewok toy in the dog bed for the win

I don’t want to sound like a depressing Sarah McLachlan ASPCA commercial, but in all honesty, please adopt and don’t shop. Our local shelter only reached the designation of “no kill” in November, before that they were reported to be euthanizing animals in the hundreds each month. There are plenty of adorable mutts and even some purebreeds available through your local humane society, or look up rescues for a specific breed and you may be able to find and adopt the kind of dog you want (like the Greyhound Rescue). And just because a dog had a troubled past doesn’t mean they won’t make a good dog; those dogs can actually make the best pet with some patience and work. The dog snoring beside me is already a testament to that.

One response to “My Adopt Don’t Shop Story”