What is Sacred for Comic Book Adaptations?

With the marked increase in movies and TV shows that are based off of comic books there is the equal increase of the outcry around how the comics are adapted for the screen. At the same time I feel like you will hear one person yelling about how an adaptation handled a certain character and then only a short while later someone will point out how this one comic run fits perfectly with this adaptation of the character. It’s just that there’s decades worth of comics to draw from. 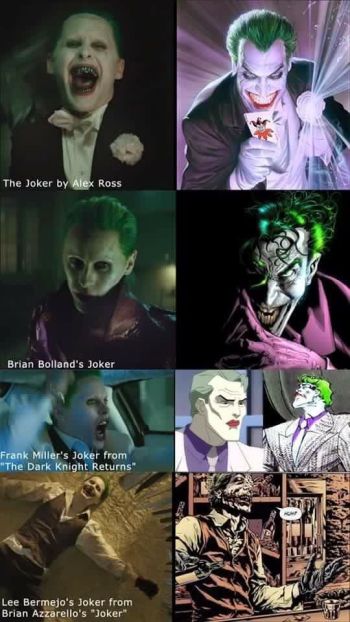 Not the image I first saw like this on Facebook… the one I liked had different TV and movie jokers over time, and the comics that they looked like.

A prime example being the new Joker as portrayed by Jared Leto. When images were initially shown of the new Joker people got up in arms saying it was not really the Joker, but then others started showing that actually there are comics that fit with this new look for the Joker. Then the question is raised about what from comic books are sacred when considering an adaptation if there can be so many differences between the comics?

Now I have only been reading comics in the last few years really, but even so it is easy to find places where there are inconsistencies between stories. Now in comics this can be explained either through the use of alternate universes or from just continual reboots of the stories themselves. So what are the things that usually don’t change?

One thing that seems to be pretty consistent across the various stories is the origin story of the characters. No matter what version of the character you are ready their origin is usually the same. Now it is not just that every version of Spider-man has the same origin, it is the combination of the person and the superhero persona. Peter Parker as Spider-man has a specific origin story; as does Steve Rogers as Captain America, Bruce Wayne as Batman, Clark Kent as Superman, etc. If certain people die to inspire that character then usually no matter which version of the character you are reading or watching those people still die.

Miles Morales, bitten by a radioactive spider.
From http://marvel.wikia.com/wiki/Miles_Morales_(Earth-1610)

Then even though there might be tweaks to specifically how they got them, there is a general idea for what they can do as far as powers go. You would not want to see a Daredevil who wasn’t blind or a Green Lantern without the ring. There are certain things that have to remain the same for it to be legitimately considered the same character.

Now this is a little bit more wishy washy than other items, but usually there is something iconic about how a character dresses, their general physique, or some specific about their personality that is core to who they are. The Joker always has green hair and pale skin; Nick Fury wears an eye patch; Captain America wears the stars and stripes; Green Arrow wears green, etc. These are things that help tie this iteration of the character to the other ones.

Even with their personality there are only a few key things that you need to keep to still make that character who they are at the core. Captain America is a Paladin who will take the moral right no matter the cost, Deadpool will break the fourth wall, and Batman will be Batman. We expect certain decisions from characters, but even that is not as black and white as some might think.

The Fantastic Four and Galactus… or Doom.

Now this is not all villains by any means, but for certain heroes there is an expectation that certain villains are connected with them at some point. We expect that Batman faces against the Joker, that Superman goes against Lex Luthor, that Xavier and Magneto will be on opposite sides, etc.

There tends to be certain villains that we expect to see when we are getting certain heroes, even if they are not the main villain, they should still be referenced in some way. If during the story a connection is never made to the iconic villain or the animosity does not exist between these two characters it would definitely be disappointing.

Now maybe there are other areas that some would argue things should not change (personality, humor level), but over the many, many different comic stories they all strike a different tone and highlight a different aspect of the character. Unless you have really read every comic about a character I feel like it would be difficult to say that an adaptation does not follow the comics if the core of the other elements are still intact.

The problem seems to exist around the fact that how we have experienced the characters might taint our view of what they should be. If all you had seen of the Joker was The Killing Joke or Jack Nicholson’s interpretation then you might not like what Heath Ledger did with the character. At the same time with how the characters evolve and change through the comics there is not one singular interpretation that exists of any of these characters at this point. There might be a few defining features, but other than that if you can make it a good story then I think you can have some leeway. What do you think?

One response to “What is Sacred for Comic Book Adaptations?”