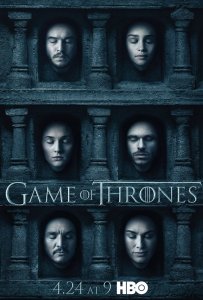 It’s happened, the thing that I feel like most fans predicted when the show began. Game of Thrones, the HBO show returning this weekend, has out-paced A Song of Ice and Fire, the book series it is (was) based on. It’s become a meme, practically, of things that George R.R. Martin is doing rather than writing… but even if the next book were coming out next month, it would be too late for the show!

I haven’t looked this up, since I doubt anyone has a solid answer on it anyway… how much of this season is based on what will end up in the books? And how much is just building off of what came before? On the one hand, I feel like they must be privy to at least broad strokes. On the other hand, it felt like they went completely off the rails last season – and that was a season with books out to back it up!

I also haven’t really watched the trailers. I just haven’t been as excited. But there are trailers… so how about one of those? And then some spoilers and wild speculation after the jump!

The 5th book – which really could have been stretched into a 6th season anyway – ends with Daenerys loose in the world, with Drogon, and with the Dothraki pulling up. Back to her roots, back to the beginning.

And it’s a solid plot point that Daenerys has become stuck in the East. That she has lost track of her desire to take over Westeros, and has gotten settled in to ruling in Slaver’s Bay.

Pulling the characters together to the one continent and one main storyline seems like a good idea. And the show has had more and more of the White Walkers, the true Big Bad of the series. Getting Daenerys and her dragons into the fight seems like the most cinematic result, so the most likely for the show.

Of course, the other thing that might help Daenerys along on a journey back towards Westeros is her new advisor, Tyrion. Having finally completed his journey there – and without many of the competing characters appearing in the show – there’s not a lot of people to stop him from being a big influence.

The amount of insider information he can provide to Daenerys – the number of stories and intriguing things he can bring up – should add up to getting her on the move.

There are fan theories around, as well, that see a much larger role for Tyrion than any we’ve yet seen. I for one would not be apposed to seeing him riding a dragon. Likely in the show? Absolutely! In the books? Quite possibly!

Arya had such an interesting story for so long. We love her. And now she’s truly on her way to becoming a faceless assassin. She’s also all off on her lonesome in Bravos, so the story may conspire to bring her back as well. And to bring along her murderous ways, her pointy-end sword, and her list of names to cross off.

I think that Arya is the wildcard. That she is good for at least one really super critical character death. Like, someone who will seem vital to the survival of the world in the face of the White Walkers. Because she doesn’t seem like she’s learning her skills from the good guys… and her list is full of big names.

Cersei? Tyrion? Daenerys? Sansa? I could see it being just about anyone. But it should be big, and it should change things. Maybe a good end to this season? Maybe it’s future season material? We’ll see! And in the books? This is also what I see her being groomed for, though I wonder if the kill she gets will be different between the two…

We know nothing of Jon Snow. See… see what I did there? Anyway.

Maybe the biggest event at the end of book 5 is the death of Jon Snow. So much work has gone into him as a character, he was doing such good things for the defense of the Wall and the survival of the people and… oh, that might be a driving plot reason for him to die…

However, he dies right up there next to a red priestess, Melisandre. Who has had many prophecies of Azor Ahai, the lightbringer and fire-wielder who will defeat the darkness. Well, the darkness is coming, and they could sure use a fire messiah. We have also seen resurrection from red priests before, both in the show, and even more in the books.

With Stannis going down (or does he really? In the book it happens off page, although in the show it seemed more certain), Melisandre is sure to be rocked in her faith. With Jon going down as well, she might sense a possibility. Could it be him? Will she bring him back?

Because one thing is for sure: we keep seeing him in the promotional materials. Is Jon Snow Azor Ahai? And if he is… is he the one character that it seems unlikely that Arya would kill? Honestly, these questions are the ones that have me most interested in this season, and make me wonder the most what will be similar between the show and the books!

But that’s some of my thoughts… let’s see what others have to say!

And how about you – what are your thoughts about Season 6 of Game of Thrones? Let us know in the comments below!