Harlan Ellison’s “The City on the Edge of Forever”

Let’s talk about “The City on the Edge of Forever”! A classic Star Trek time travel story, and generally considered to be the best episode in the Original Series. Harlan Ellison, distinguished science fiction author, wrote the first script. 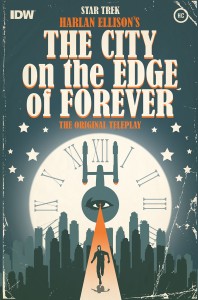 However, his script was heavily edited to create the episode we know and love, and he’s been complaining about it ever since. He published his treatments and scripts in the 1990s, and in 2014, collaborated with Scott and David Tipton to release a comic-book version that would finally offer the visuals he intended.

Ellison adores it, as stated repeatedly in the introduction to the collected edition, so we can safely treat it as “the Harlan Ellison version.” (I hesitate to call it “the original,” as he did several rewrites, it’s coming so long after the version we all saw first, and a script and its production are both “original” in different ways). With this comic book, we can finally see what all the fuss is about.

Here are the points of departure:

The villain. Instead of McCoy’s hypo accident, we get more of a broody cold-SF opening wherein Kirk’s voiceover considers the psychological effects of two years in space, and we see a sleazy officer — Beckwith — manipulating a junkie, trying to get insider information about the planet they’re approaching and how he can take advantage of it. We’re told he’s so far gone he caused a massacre on one planet, and isn’t sorry. One thing leads to another, Beckwith murders the other guy and flees to the planet below, followed by a search party. As I’m sure you can guess, Beckwith is the one who tries to escape through the time vortex. He eventually meets a very unpleasant end.

The resolution. The comic brings in a lot of elements here. Most important is that Kirk openly refuses to let Edith die, while Spock is willing to kill her himself. It doesn’t come to that, but Spock is the one to stop Beckwith from saving Edith. Ellison also included an additional character, named Trooper but repeatedly referred to as “the cripple” (mostly by Spock), who is killed by Beckwith but is deemed “negligible” to the timeline. That bothers Kirk about as much as Edith’s death, along with Kirk’s inner conflict over Beckwith’s inexplicable attempt to save Edith.

The characterization. I’ve mentioned a few odd interactions between Kirk and Spock above, but they are the strangest element. While their interactions are the meat of the story, much more so than Kirk’s and Edith’s which are almost an afterthought, they act like strangers. In conversation, they respond to each other but give no sense of engagement or personal history beyond a certain military loyalty. They only breach this cool distance at the end, when Spock calls Kirk “Jim” and invites him back for a relaxing holiday on Vulcan. Kirk observes it’s the first time Spock’s called him Jim. 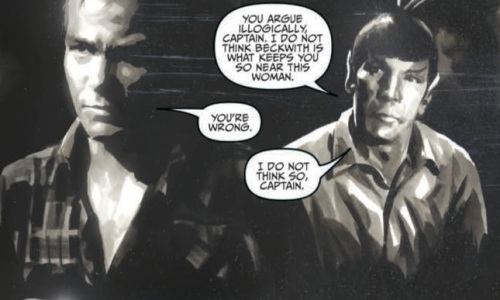 In sum, the story’s actually much better in the episode’s adaptation. While some of Ellison’s heavier elements might’ve been appropriate, his version is cluttered and unfocused. Where the episode brought everything together in a simultaneously intellectual and poignant way centered on Kirk’s decision, the comic is directionless. Too many random tangents to squeeze into the time allotted even if they did contribute to the story, which they don’t, and too much philosophy to actually have an emotional or intellectual impact.

Even worse, though, is that Ellison was clearly not familiar with the tone and characterization of Star Trek. Maybe he wrote it before any other episodes were available to look at, but either way, it would’ve been a terrible episode if it made it to the screen as-is, because it just doesn’t match. There’s no trace of Trek’s signature optimism, while Kirk and Spock act like they’ve barely met before. Positioned as it is at the end of season one, Spock had already used Kirk’s name many times, and even in the pilot episode the two of them had known each other for some time.

I can’t comment on all the interpersonal controversy surrounding Ellison’s script. All I can say is that as written, it doesn’t work as a Star Trek episode. However, it is a well-done comic, and I was thrilled to finally see it as he intended!