Holly got us started yesterday… It’s time to be thinking of the year ahead! It has the looks of quite a year. I want to try to avoid repeating Holly’s stuff, so know that I’m excited for everything she is! We have a lot to look forward to this year with the Geek Baby, for one thing – she’s not even crawling yet so we’re about to have a string of changes! But we’re hoping with that comes, too, the time for us to maybe do a bit more of what we love, like going to the movies or co-op video games (we’re starting to stack up Lego games we haven’t played). Yep, pretty much Holly’s post so far… so how about segue to more from me!

Year of the Superheroes

Holly mentioned movies, but this year is the beginning of the true onslaught of comic book movies coming out over the next four or five years. Between Fox and the X-Men properties, Marvel Studios and all the Avengers-related properties, Sony and Spider-Man, and DC and all their heroes, it’s going to be a lot.

Probably. It’s probably going to be a lot. 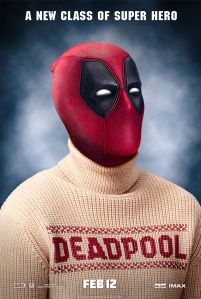 Thing is, I could see a number of these plans being bailed on if the movies don’t pan out, don’t make money. But this year, this year’s movies… they’re close enough to done that I expect all of them to actually happen. So this year, at least, is the year of the comic book movies. From Deadpool through Doctor Strange, I’m intrigued or excited for them all. And hoping to catch them all in theaters.

But there’s TV, too. With Agent Carter coming back, Daredevil, Agents of SHIELD, Arrow, Flash, Legends of Tomorrow, iZombie, Supergirl, and probably more I’m not thinking of (probably another Marvel NetFlix show this fall?), they’re all going to be happening this year.

I even think I’ve heard the Supergirl has already been renewed for a second season this fall – and I think that its second season is going to be even better than the first, once it has its origin and characters and world firmly planted. And I think once Legends of Tomorrow has spun off and exists (give it a couple weeks), I think there’s a lot of room for Arrow and Flash to get even better – they’ve been setting up the new show pretty heavily.

Anyway – this is the year that this is all definitely happening. And if it goes well… next year will be too!

There’s one thing in particular I’m really excited to read – Secret Wars, to finish up with Hickman’s run of Avengers and New Avengers. I’ve been waiting for the combined volume to read it all. And with it, I think I might be good on current Marvel comics for a while – then it’s read other things time!

As Holly said, she’s planning on two books a month this year. She reads faster than me, so I’m going to try for one book a month, but still… reading! Since we’ve decided I’ve already read over 100 pages in the book I’ve been reading for like 6 months, so that’s a nice start!

There wasn’t really a lot for us to be excited about with games a year ago – without one of the new generation of consoles, we were hitting the end of the games we could get. Although, they’re still coming out on the old consoles… But the exciting stuff is on the new systems! I’m looking forward to Deus Ex: Mankind Divided but that’s this fall… and there are other games that might squeak their way out this fall too… like Kingdom Hearts 3.

But there’s also older games we still haven’t played, we still have PS3 classics that we haven’t played yet. We’ve actually borrowed The Last of Us and Beyond Two Souls and Heavy Rain from friends, so we should totally play those!

But the one I’m most excited for – and soon! – is on the computer it seems. I only just heard of it recently, and can’t believe it’s snuck up on me like this. It comes out in a month – XCOM 2.

Maybe it’s awful to say, but it’s (past) time to move past Clara Oswin Oswald and I’m glad that’s finally happening this year. Unless it doesn’t, since she just keeps coming back… I loved Doctor Who series 9, so I have a renewed hope and expectation for a great series 10. Just have to wait until this fall…

I may not have done great last tournament, but it’s up and beyond from this point! Starting with the convention coming up later this month, and continuing on with hopefully several tournaments this year… there’s a lot to look forward to, to plan for, to paint and model for.

Plus I got my hands on a new laser cannon tower…

I’m going to be blasting all sorts of things! It’ll be fun, and I’ll keep the photos coming via Instagram as I go!