The Muppets, a Reaction 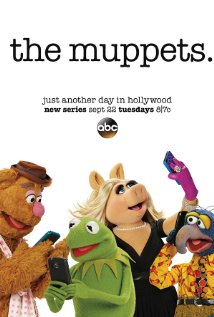 I don’t know about you, but I was super excited about The Muppets coming back to television. They are a part of my childhood and I love them. I even own the first season of the old Muppets variety show. I have seen all the old movies and the recent resurgence of the Muppets in the movies was fabulous. It was such a fun re-introduction to these characters that we know and love. The Muppet characters are something that I want to introduce to Geek Baby some day.

So we sat down tonight excited to watch the first episode of The Muppets, but in the end we were disappointed. Instead of getting something whimsical and fun, it ended up just blah.

Not a Variety Show

One of the great parts of the original Muppet Show was the fact that it was a variety show. All of the Muppets put on a variety of bits that were often so funny and just entertaining. They took you out of your hum drum life and took you to someplace spontaneous and fun.

The new Muppet Show on the other hand decides to show Kermit and company running a successful late night show that is hosted by Miss Piggy. Instead of the characters being zany or quirky they seem to be worn down from the weight of things. They tried to take something zany, exciting, and unpredictable and turned it into a drudgery.

Now speaking of Miss Piggy they have turned her from the lovable Diva into an overbearing boss. I mean Miss Piggy has always been a big personality who knows what she wants and goes after it. The show has her come across as someone that everyone is afraid of and that she does not actually care about anyone else.

Now while Miss Piggy has always been over the top she has never been mean. There has always been some problems with her character, but she has always been a strong, confident woman who cares about the other Muppets. How she is portrayed in the new show very much comes across that the woman boss can only be overbearing and mean.

The other half that comes along with the misrepresentation of Miss Piggy is the promotion for the show was the scandal of Kermit and Miss Piggy breaking up. Now this could have been played off in a cute way, but it turns out to be really sad. The part that bothers me the most is that Miss Piggy comes off as selfish and uncaring for Kermit. Then you have Kermit already dating someone else, also a pig, and she comes across very submissive and nice. The fact that she is nice is not a problem in and of itself, but it definitely sends a bit of a message that the woman needs to support her man and not the other way around. It just really rubbed me the wrong way.

This all leads to the overall issue and that is that many of the Muppets themselves just do not feel the same. It is a subtle shift, but there is definitely a sense that the core of who these Muppet characters are is not the same. The Muppets is meant to be fun for the whole family, but the new show definitely seems to be taking them in a more adult direction. The problem is that they have taken the joy out of the Muppets. I am willing to keep watching to see if the joy gets found again, but I admit that I am not hopeful.

16 responses to “The Muppets, a Reaction”