Fantastic Four – Kind of a LitFlix

So, I wasn’t really planning on seeing Fantastic Four in theaters. We talked last week about how we got the chance to go see it – and I started furiously reading the comics I planned to read. That is, Jonathan Hickman’s Fantastic Four and FF. 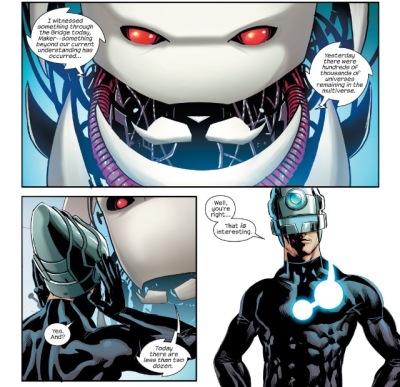 I think that my opinion on this character is completely colored by which comics I have been reading. Hickman explores the idea of Reed Richards throughout alternate universes, all the Reeds. And the main unifying fact of their existence is that their father, Nathaniel Richards, leaves them. 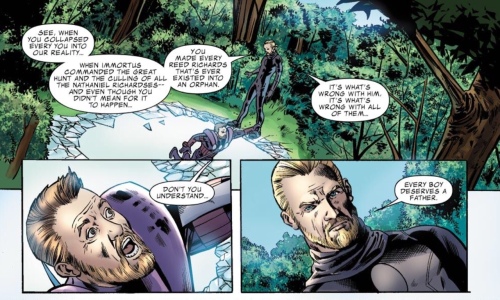 I mean, the Nathaniels leave the Reeds for really complicated reasons… but they leave.

Except in the movie, there is a Nathaniel – he’s just not Reed’s father. He’s Sue and Johnny’s. And he is 100% the father figure of the film, but still, it lacks the abandonment element then.

And part of the point with the family abandonment element for Reed, then, is that Reed is predisposed to eventually choose his work over his family. By removing his father and the influence of his leaving, you remove this intriguing plot point about Reed.

And in the movie, Reed does abandon them – but why? I don’t know that I feel like there was a reason why. For a year? And if the answer is so he can solve everything… it takes him a year plus to do so?

In the movie, I did not get that vibe at all. Let’s go through a few points.

I feel one of the biggest failings of the first movies was not doing Reed very well, and I feel like that problem exists here as well. Although Miles Teller did a good job, I was honestly not expecting that. It’s not his fault they wrote him as an entirely average smart guy. 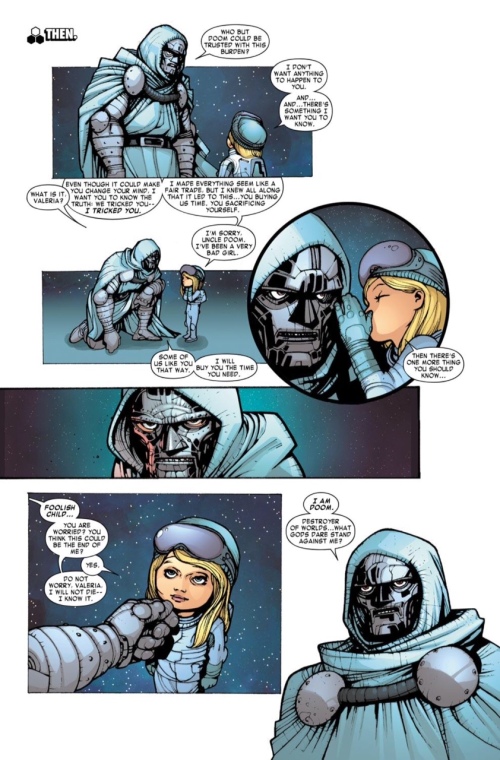 Who’s the biggest bad of all? Doom. So who didn’t end up that in the movie? Doom. Well… he does, kind of. But not at all for the same reasons.

However, in the movie, Doom does not scheme. He does not have any control, really, at all over his circumstance. The will to power, the sheer will, of Doom is not a part of it at all. He gets power, as an accident, and really just defends himself when the time comes.

As Holly said in our movie review, it really could have been pretty much anyone in that roll. My thought? How about a Super Skrull. All the power of the Fantastic Four, fighting against them. They live on the other planet. Could have been great. But no, they used – and possibly used up – Doom.

And like in the previous movies, Doom wasn’t royalty. Which is another big part of his character, and would be the other big thing that I would say both series have not done well. And when you don’t do Reed right or Doom right, it’s no surprise that you can’t make a Fantastic Four movie that feels right. 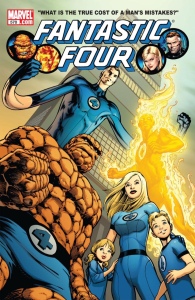 The Fantastic Four are regularly, in the comics, some of the ones who see the most of the cosmic side of things. The most of space, and aliens and alien worlds. And this movie delivers on that element well – and leaves me intrigued for what they’ll do in the next movie. Again: Super Skrull?

However, the one other thing that the Fantastic Four is known for is being a family. And while they set up the basis of this in the movie, they didn’t actually get them there in this movie. For instance, only Reed really even knows Ben – there’s a lot of getting to know him to come. And coming into their powers. And coming into their teamwork. That’s all only just begun.

I thought Kate Mara’s Sue Storm was great. From what I read on the Wikipedia page about Ultimate Fantastic Four, Sue takes up more of the leadership role. I think that would follow from what they gave us in the film. I’m looking forward to it!

Want another Fantastic Four movie review, other than ours? Check out the joint review over on Sourcerer!

6 responses to “Fantastic Four – Kind of a LitFlix”