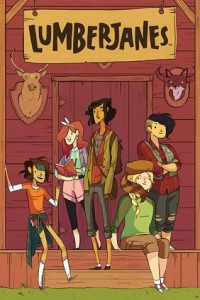 Guest post by Leah, who writes at  The Lobster Dance, a blog about gender and media (and often Japan) and I’ll Make It Myself!, a food blog about gender, geekery, and sometimes cannibal jokes. Find her work on Comparative Geeks here.

This review has one mild spoiler, but if you’re like me, it’ll make you want to read the series more!

You’re in a quiet theater, watching the previews for the latest action ensemble movie. Out of the silence you hear it–

But what if they were all women?

For anyone who has ever wanted a diverse, feminist version of The Sandlot*, Stand by Me, Goonies, or any other movie starring pre-teen boys having super cool summertime adventures, Lumberjanes is the comic for you.

I love this series so much that it deserves a bullet-point list.

This quote from an interview with Comic Book Resources is a bit long, but it (and the full interview) are worth your time:

Stevenson: One of the biggest issues plaguing female characters is that, because there are relatively few of them, there isn’t a lot of diversity, and the conversations around them push very specific traits as being “more feminist” — typically masculine traits like physical strength, emotional toughness, etc. — and there ends up not being a lot of room left for genuinely nuanced and organic female characters. Because when there’s only one woman in the cast, she has to be everything for everyone, and that’s not really possible. Every person is both strong and weak at the same time, and if you can’t show that weakness and you can’t show how there’s lots of ways to be strong, you don’t really have a real character. The best way I can figure to address that is to have way more female characters. Just, like, so many. Then it’s not on one woman’s shoulders to represent all women in a positive way. They can be heroes, villains, ambiguously moral, comic relief, femme, butch, strong, weak, etc. and what you’ve got are — people.

Ellis: …It just seems so silly to me that there isn’t a wider array of women in media because all you have to do is write more women who aren’t in the story only because of men, so yes, this project is definitely an intentional effort to chip away at the mountains of cliched women in comics and media at large. I mean, the main point of the comic is that it’s a good, interesting story, but I’m happy that we have the opportunity to tell it in a way that could help rip down the “No Girls Allowed” sign outside the comics clubhouse.

As much as I love genderswap, having new and original works that focus on having an ensemble cast of women (and non-binary) characters is also critical to the revolution. Lumberjanes is the answer to all your camp adventure needs for kids and adults alike. Or, in the words of April, “Good Juliette Gordon Low, we’re allowed to have something good happen every once in a while!” (vol. 4.) Lumberjanes is a “something good” that makes every new issue feel like feminist Christmas.

Get Lumberjanes on Boom Comics | Comixology| Amazon | ask your local comic shop! I like to get mine at Phoenix Comics in Seattle.

*Real talk: the epilogue clearly shows that Benny and Smalls are baseball husbands. Fight me.

8 responses to “Guest Post: Friendship to the Max! Lumberjanes”