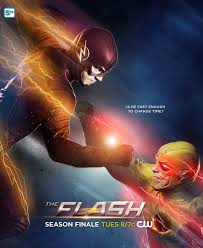 The season finale of the Flash was outstanding; the perfect ending to an entertaining first season. Barry Allen first wormed his way into our hearts when he made a guest appearance in Arrow as the somewhat goofy forensic scientist from Central City. It’s no wonder he got his own show; the first thing you noticed about the character is his inherent goodness and, like Oliver Queen, his belief in justice. Add in the self-deprecating humour, his keen intelligence and strong moral code and it makes a winning combination. Holly wrote a review of the first episode, and you can find it here.

Since the Flash began we’ve watched Barry adapt and grow into the delightful hero he is, and yet his powers aren’t the thing which makes him special. It’s his desire to help people, to always see the good, and his almost selfless outlook on life. He’s struggled with personal demons; the loss of his mother, and the knowledge his father is in prison for a crime he didn’t commit. This injustice is part of what drives him, and even when he’s developing his skills or fighting crime, his mother’s case is never far from his thoughts.

During the show we’ve witnessed Barry come head to head with a variety of meta-humans (with a little help from his friends). Characters like; Weather Wizard, The Mist, Multiplex, Blackout, Girder, and Peek-a-Boo, to name but a few. And who can forget Leonard Snart, aka, Captain Cold, who was extremely entertaining.

We’ve shared in Cisco’s excitement when he created a name for each villain, and cheered when Caitlin got Ronnie back, even if she had to share him with Martin Stein as the pair became Firestorm. Then there is Barry’s relationship with Iris West; an unrequited love which pulled at our heart strings because at the root of it all, they are best friends.

One of my favourite elements of the show is Barry’s friendship with Joe West. Joe is his confidant, his anchor, and in so many ways another father to Barry. He is an excellent role model, someone Barry can always turn to, and he relied heavily on this foundation when he discovered that his friend and mentor, Harrison Wells was hiding a terrible secret. Fans of the show will have figured it out before Barry, thanks to the clues about Harrison’s true identity. You can learn more about the predictions on Doctor Wells, here.

The fact Wells turned out to be Eobard Thawne, the Reverse-Flash, may not have been a huge surprise to us, but it certainly knocked Barry for six – especially the fact he was responsible for his mother’s death. The build up to the big reveal, to Wells’ escape and eventual capture was thrilling. 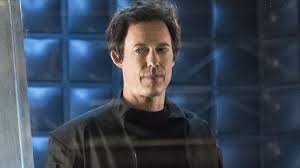 Which brings us to the finale, and the moment Wells (Thawne) told Barry he had the power to go back and, not only save his mother, but prevent his father from a life in prison. The implications were huge; the thought of saving his mother, combined with the risk of losing his family and friends. If the journey we take in life is more important than the destination, I couldn’t help wondering how different Barry’s future would be if he changed his timeline. Would he still have a strong belief in justice? What new experiences would shape his life, and would he ever gain his abilities as the Flash?

His father’s response to the news was a surprise, given that Barry was presenting him with an opportunity to reunite their family. I was extremely moved when Henry told him not to change a thing; that he’s proud of the man Barry has become. I have to be honest, I was an emotional wreck – especially after the conversations he had with Joe and Iris. It was a huge moment, the fact Barry was prepared to risk death, and allow Wells to escape by going back in time. The goodbye scene was hard enough, and then Barry called Joe dad. I’ll just say there were tears – lots of tears! 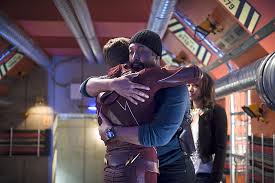 But in the end Barry never got to save his mother, because his future-self intervened. I wanted to be glad he got the opportunity to say goodbye, but the scene just about destroyed me. It was superb acting. The whole episode in fact, had some outstanding performances from the cast.

The twist, which I should have seen coming when Stein gave Eddie a pep talk, was just another jolt along the emotional rollercoaster. I like Eddie well enough, but I really didn’t expect him to sacrifice himself to save the day. He ultimately killed Wells (at least in one timeline) by shooting himself. Eobard Thawne, therefore, never came into being. It’s a lot to get your head around!

There were other wonderful surprises in the finale – the hints regarding Cisco’s future; Jay Garrick’s helmet flying out of the wormhole (the original Flash); and the black hole which threatened to destroy the world.

I’m not sure what’s in store for us next season. The episode ended with Barry disappearing into the abyss as he tried to save the earth. You can’t get more exciting than that! Whatever happens, the show will no doubt continue to entertain. The cast is strong, the storylines thrilling, and the light-hearted humour sets it apart.

What did you think to the finale? Do you have any predictions for next season? I’d love to hear your thoughts.

Hope you enjoyed this season review of one of this year’s best new shows! This was by Mel and you can find her on her own blog, or reviewing Arrow over on Sourcerer!