Amulet – All Caught Up

So after Holly and I started reading Amulet, Holly wrote an initial review. When we were about halfway through reading, I got to chance to see the author, Kazu Kibuishi, presenting live about his process. Now that I have read through Volume 6, and am now officially all caught up with all there is thus far, I thought I would add a bit to the discussion.

I don’t want to add too many details because, like Holly, I don’t want to spoil you – I want you to read these. They’re great. And knowing more now as I do, I think they’re even better – as they were developed entirely as Graphic Novels, as a form – not printed as comics and then bound together. I had mentioned in my previous post that I had more I could write about that, and about Kazu’s process – so I’ll talk about that!

Then I’ll just talk about a few of my favorite aspects, and things that I think might interest you more in the story, to get you reading too! I have found Amulet on ComiXology, so I know that is a reading option. It’s also wildly popular with younger readers right now, and published by Scholastic who know how to get kids and adults reading the same thing! As such, you should definitely be able to find this at the library, at least in the US! (Sorry Japan, you might not have this one.) Alright, let’s take a look at Amulet!

Not Serialized but still Broken Up

TL;DR Most “graphic novels” have been printed first as a comic, coming out monthly or so. This gets the author editorial and fan feedback, and forces them into writing small sections of the story that each have their own internal story arc. So they write a number of small stories, that overall create a larger story. Like chapters in a book.

It’s Kazu that really got me thinking about this, as well. After all, I read a lot of comic book stories this way, like the various Batman comics we’ve been reading lately, or buying other digitial comics in their collected volume form. Sure, I’ve also read some in daily format, like webcomics, or in their monthly format. Monthly got out of hand, though, and I fell off the webcomics wagon. But collected editions? I can read those!

So the reading experience on Graphic Novels is good, okay, I’ve made the point. And I talked in my other post about some of the positive things Kazu had to say about the form, like how you can get one creator’s voice (if they are writing and drawing!) and how comics, in general, are one of the most effective ways of conveying a message. But what about Amulet?

When writing the first volume, Kazu came to find that writing the whole thing at once, it read as a “flat” story. It read as though it were a really long, single comic – and most “graphic novels,” as they are, are made up of a bunch of comics, often 12 or so for a year’s worth of comics. So instead of reading like 12 comics, it read like one long comic. Good and bad, right?

Kazu had to go back to the drawing board (literally!) to figure out a process for breaking up his own writing and creative process. It might be like chaptering a book, as well, something you have to figure out for yourself as a writer. 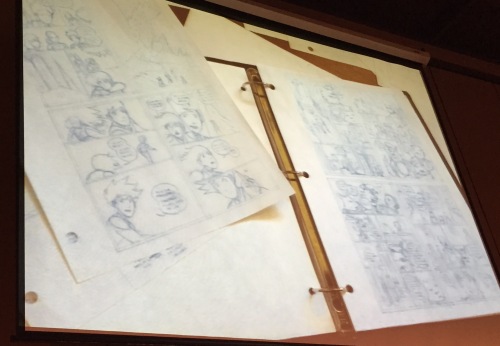 A shot of Kazu showing his process and binder.

What he does is work from a binder, where he can add and remove the pages. Where he can collect sections together, can decide when they are done or covered a whole arc. Where he can move a whole section earlier or later in the story, or move events around within them. This fluidity of storytelling allows him to self-serialize the story, breaking it up into sections following the different characters as they work their way through the world.

This also allows him to follow one of his big pieces of advice: the best piece of work should always be the one in the final edition. By having the pages and sections separate, he can always be saving – and using – the best part of all of it, leading to a better whole.

The final product, having read Amulet thus far, reads well; it reads like the genre as a whole reads. It has broken up sections. Heck, it reads like books do as well. Think about something like Game of Thrones, which moves between chapters following different characters. I could see George R.R. Martin using a similar sort of process. But in this medium, the Graphic Novel, that process had to be reimagined!

Alright, so time for a quick tour of some of my favorite things. One is the art, which, having watched Kazu at work (pictures in my last post), I have even more respect and appreciation for. It was cool before, but I had not noticed quite the extent to which the backgrounds were so detailed in perspective and beautifully painted, and the characters were so much more cartoony and direct (on purpose!).

One thing I learned is that they go out looking for inspiration, and look at real-life things for how to create some of their landscapes and locations. The characters, sure, they’re there and largely have to keep looking the same – that’s how it works. But the locations?

They went to Turkey to figure out this one. And I found out more about ones like this. This image in particular, all Kazu drew was the planes. The city was drawn by his assistant (and talented artist and creator in his own right!), Jason Caffoe. Jason, and a team of intern/assistant colorists, do a lot of the after work, and some of the full spread background work. Jason travels with Kazu and sees the locales, and with their power combined, places like the flying city of Cielis come to life!

Kazu also talked about how a two-page spread like this serves an important purpose for the reader. Sprinkling pages like this throughout, the reader is left with an impression of them in their memory. With an idea of the scale and the scope of the places. This impressions stays with the reader far longer than the images from the individual panels. Therefore, they tend not to include any text on these pages! Oh, and you can buy many of them as prints – check it out on boltcity.com!

Okay, I haven’t been quick yet, so! the story. Six graphic novels in, and so much has happened! Kazu brings back in characters and plot points from volumes back, and everything is weaving together to move us forward! I love the way that the threads have not been dropped.

Overall, the story will be a “trilogy of trilogies,” so nine volumes. As such, we’ve just hit the end of the middle section, and as usual in that situation, things are not going so well! But that also means the heroes are deciding it’s time to take matters into their own hands, and see if they can’t solve everything.

The last three volumes should be out in the next few years, so if you’re the sort who likes to read a complete series at once and not wait, keep Amulet on your radar! However, I also challenge you to pick up the first volume and give it a try – I think you’ll be hooked! 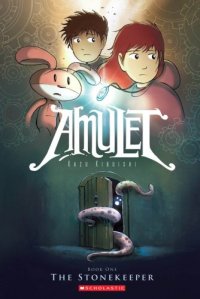 If I were to mention one last thing, it would be the characters. They regularly surprise me, their allegiances are never quite what I expect – and you get the backstory and character development to find out why that is. They aren’t archetypes or one-dimensional, instead having good motivations for why they’re doing what they do.

And also, sometimes you want to reach through the page and shake some sense into them. Realistic!

I would add one more TL;DR note from my other post: the lead character is a strong female character.

Every once in a while Feminism comes up on this blog, and if this is something you think you would be interested in, definitely give Amulet a look. Even better, in my opinion, is the fact that this was not something that Kazu forced in, but came naturally from knowing strong women in his life. I look forward to one day being able to introduce Graphic Novels to the Geek Baby via Amulet!

You can find Kazu and his work on his website, http://boltcity.com/ and follow him on Twitter@boltcity (along with Jason @jcaffoe) where he posts a bunch of great photos, like some of the ones I posted here! Photos taken live by me during the presentation (unless otherwise noted), and I got permission from Kazu to post them here!

9 responses to “Amulet – All Caught Up”