Yesterday Holly gave her review of Batman: Hush, which is one of those comics from the canon of Batman. I’ve been working my way through various Batman comics, in a not-particularly-chronological fashion, but Holly’s only read a couple along the way. So her review was more about the comic itself, about what it was all on its own. Great review, and I’m going to try to not repeat what she wrote, and to still say something new!

As such, I’ll be looking at the story especially in comparison to another Jeph Loeb-written Batman story: The Long Halloween. On the surface, the two are very similar, so I’ll look at that. However, there are also some strong differences, so I’ll round out by looking at those. Then some final thoughts around stuff that Holly didn’t say, such as it is and as won’t be too spoilery, and thoughts on what I’ll be reading next from Batman!

For my first thoughts though, how about the art? It’s really something in this comic. As commenters have pointed out on Holly’s post, the art is by Jim Lee, and is top notch. Every once in a while the comic just stops for a nice big two-page scene, and it’s just a lot of fun to read from that perspective as well. I’ve really enjoyed Loeb’s story’s, but the art in this one stood out a lot as well, meaning it really is the whole package.

Hush and The Long Halloween

The Long Halloween was a year’s worth of comics, chronicling an early-days case where Batman was trying to catch a serial killer called Holiday, who killed on holidays. There were many twists and turns, misdirection and wrong guesses and red herrings. Such that you are really only finding out what really happened in the last few pages – and even then I am not sure I believe it. Along the way, you encounter nearly all of Batman’s rogues’ gallery.

Flash forward to Hush.  We start with Batman on the case, chasing Killer Croc, then Catwoman, then Poison Ivy… from there on and on through the rogues’ gallery again. The big names, the villains you know from the movies for the most part. Pretty much one per issue as the comics went by – pretty much like with The Long Halloween.

And again there’s the big mystery, only this time, the victim is Batman himself. It’s not a question of who’s the killer. It’s a question of who is teaching Batman’s foes to do new things, to surprise and beat Batman potentially by doing so. Batman takes a beating in this story, and it’s impressive he comes through it alive, honestly.

There are other comics this could be compared to as well, I’m sure. The one that comes to mind is The Dark Knight Returns, with the battle of Batman versus Superman. Not much to say about that one… let me show it instead:

Definitely its own Story

For one thing, the expectations of the villains is very different. In Hush, it’s pivotal to the story that Batman knows how they operate, that he’s defeated them so many times, seen them in action and in crime, that he knows how they tick and why. It matters that they are changing that up, as it shows Batman for sure that someone is convincing them to do so – it is the mystery.

In The Long Halloween, there haven’t been nearly so many encounters. Some of the characters are created, even, like Two-Face. Indeed, it is interesting to see how Loeb gives us the comic creation of Two-Face, with the acid burn of Harvey Dent – and then in Hush, he puts Harvey back together with some plastic surgery. Full circle.

However, I was maybe expecting more moments like this, more callbacks to the other comic – not so. Maybe there’s more of that in Batman: Dark Victory, which is the actual sequel to The Long Halloween. One I’m planning on reading at some point!

However, Loeb can’t resist dipping back into the early days of Batman, or rather of Bruce Wayne. The comic is full of flashbacks, and it seems to me even ret-cons in some characters from that past. He pulls it off with side characters asking if they had ever heard Bruce mention them before, and comments about how secretive he can be!

All-in-all, this was a very different read from The Long Halloween. I would say I liked Hush for many of the same reasons, but it totally stands on its own. And, as people mentioned yesterday (Holly and commenters), it’s a great place to start reading some Batman comics!

Not Much to Add except – Catwoman

Holly pretty much covered everything else I could think to say, except that there’s a whole lot of Catwoman. Apparently at this point in the comics she was trying to make good, and Batman was willing to give that a chance. To the point where he even eventually reveals his secret identity to her! I was surprised by this, but even moreso surprised to find out that this didn’t happen in the comics, apparently, until this point!

I had a Catwoman comic recommended in the comments on my Long Halloween post: Catwoman: When in Rome which is by the same creative team of Loeb and Sale. Impressive team, but sadly not available at our local libraries, unlike Dark Victory, so I’m more likely to start with the latter!

However, there are a couple of other stories, by other writers, that I want to get in to. One is Knightfall, which I thought I had requested from the library to read next… 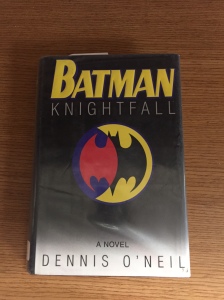 Wait, what? That’s not a comic. That’s a novel!

Whoops. Okay, so they have the comic, but I definitely requested the novel instead. I thought it was just the combined version! Which, I guess technically, it is…

And the other one I want to read is The Court of Owls, but that would get me into the New 52, which is probably where I want to end up. So I should finish some of these Batman classics first and then get to the new stuff! Meanwhile, I’m reading more of Amulet because I’m getting to see the author speak next week!

Sorry for all the glare… the pictures are all from Hush.