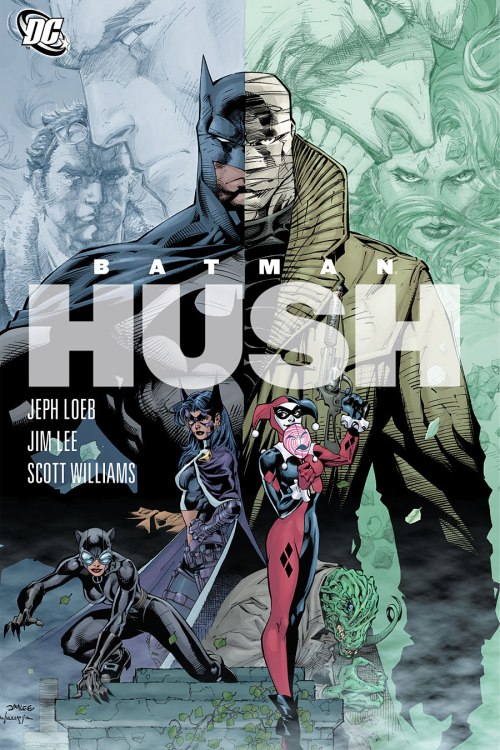 Recently David and I finished reading the Batman Comic Hush. So part of both of us reading it we are going to each give our perspective on the comic. I having not read many other Batman comics will just have a perspective on the story that was told in this comic. First of all this story is fantastic and I would highly recommend it to anyone. I do think it is good to have a general idea of characters that are in the DC universe, but especially Batman and his various villains, because so many of them show up in one way or another. This story spans so many locations and characters it really is an epic struggle that is being told. The other interesting part is that they do a great job of keeping the mystery going throughout the story. We see all the clues that Batman sees so maybe we might guess the finale before him, but at the same time the story definitely kept me guessing throughout.

The number of characters in this story is almost ridiculous. You have Killer Croc, Poison Ivy, Catwoman, Joker, Harley Quinn, and more. It is an array of characters that show up in this comic and each one that appears seems to give a new knot about what is actually going on. This is not just limited to introducing us to the various Batman villains, we also get Commissioner Gordon, Alfred, Nightwing, Green Lantern, Oracle, Superman, Lois Lane, and probably someone I am forgetting. We not only get introduced to each of these characters they do a great job of giving us a brief history of each of them as well. Many of these stories probably played out at some point earlier in the comics, but it is still great to see them take those back stories and use them in the overarching mystery being played out.

One of the interesting things that I found with this whole story is how it spanned from Gotham to Metropolis. Usually you would think of a Batman story taking place in Gotham city, but this takes us from the sewers of Gotham to the streets and sewers of Metropolis and back to Wayne Manor. This allows us to introduce a lot of different characters and for us to look at the differences between Metropolis and Gotham. While this does not relate to the mystery of the story specifically it does give an interesting perspective on the DC Universe and the world of Superman and Batman. It was an interesting flavor twist to have the mystery expand beyond Gotham and head to Metropolis.

One of the great parts of this story is that it truly is a mystery that begs to be solved. We seem to have someone pulling the strings all around Batman, but with no idea of who is really behind it. The story starts out like a simple rescue mission, but as the story goes on it just gets more and more complicated. The story keeps taking twists and turns along the way and we are constantly going in different directions. Now if you have been reading the comics and hit all the stories I could see how you might get to the conclusion a bit sooner, but I still think they do a good job of keeping the guessing game going.

It is difficult to go into too much detail because what is great about the story is the mystery and you need to read it for yourself. The story kept me enthralled the entire time and it honestly makes me want to read more Batman comics because it does such a good job of introducing the world that Batman exists in.