This weekend we went to see Jupiter Ascending, something we were debating doing. In the end, all the reviews telling us the movie was terrible, you should see it made the difference!

I feel like reviewing the movie is pretty quick and easy for me. I did not find it as bad as some did. I definitely feel like the ideas – both story/world ideas and visual ideas – were much better than the character interaction and dialog. And maybe their biggest problem is how easy it is to compare to Guardians of the Galaxy – a movie which they could have come out before, but instead came out after. So Channing Tatum comes across as a poor-man’s Star Lord, rocket-skates and all.

I guess he knows how to rocket skate really well because he used to fly?
Found on http://collider.com/jupiter-ascending-review/

So I want to look more at two aspects of the film. One is the comparison to other science fiction, where I have found people comparing it to all sorts of other movies – but for me, there’s really only one main comparison. The other aspect I want to look at is the thing that I think could have made the film better – more characters! Maybe some spoilers to follow for Jupiter Ascending.

Wait, this isn’t a Matrix Movie?

I would say I definitely saw pieces of other science fiction in The Matrix and especially in its two sequels. However, when you trickle this down to Jupiter Ascending, what I really saw was a repeat of things from The Matrix trilogy.

More than anything it was some of the speechifying. Like in a Tarantino movie where you know someone is going to start using big words and trying to get philosophical, the Wachowskis do the same thing. Especially the main antagonists, the three Abrasax sibling, who seem to at times be channeling the Oracle, the Architect, the Merovingian, and even the Keymaker. It was that definite feeling that, “yep, I’m at a Wachowski film.”

They talk about the siblings and the mother in the movie… here is their absent Father…
Image from http://en.wikipedia.org/wiki/Architect_%28The_Matrix%29

So while maybe there’s pieces of Dune, or Blade Runner, or what have you in this film, it wasn’t overpowering to me. Not the same way that the reused ideas in a movie like Avatar stood out to me. Also, it did not feel like a ripoff of Jodorowsky’s Dune, so that’s something.

The other main thing that really connects the plots is that this is a science fiction movie in the sub-genre of Chosen One stories. Of which The Matrix is one of the best examples (I mean, you don’t get much more into the genre than having a character titled “The One”).

However, as the “chosen one” of the film, Mila Kunis’ Jupiter only really has one thing that she has as a power: the legal power in her inheritance. No special powers or knowledge, just that she needs to be alive long enough for someone to weasel said inheritance from her. Oh, and the bees. 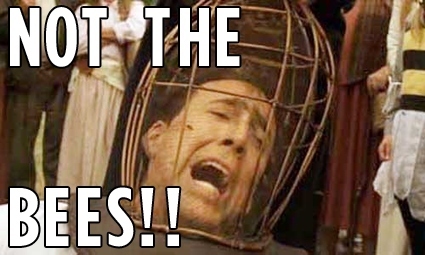 So it ends up feeling like a joint chosen one situation, as Channing Tatum’s Caine functioning as the other “chosen one.” Along for the ride because… reasons?… he gets to do most of the action and solve most of the plot’s problems. And not with a scalpel, but with a sword. Metaphorically. *rocket skates*

What was missing: the Team

Yeah, for pretty much every problem that comes up, Caine gets to be the one to solve it. Not that he has a plan. He’s not the brains of the operation. However, he can make explosions happen at important times – indeed, Timing is the true hero of the movie.

Anyway, one thing I overheard another audience member saying during the movie was that basically they were reusing the exact same problem resolution. And they did! All three Abrasax siblings get ahold of Jupiter, and one by one Caine blasts their way out of trouble. Twice by stopping a contract from being finalized by crashing stupendously.

There needed to be a team around Jupiter, not just one guy. Give them some contractual reason they are with her – after all, in her rights they get at the space bureaucracy Halo ringworld place (okay, visually I saw a lot of Halo in this movie too…) she is entitled to protection from legionnaires. So Caine could have been defending her alone (with some help from Sean Bean) before, and there could have been more help after that. Something.

I mean, she even ends up with the Shadow Proclamation… I mean the space police… helping her out at the end, kind of. They show up with Caine and try to break in – but only Caine can! I really liked that crew and the captain was great. And Sean Bean was great. Give these characters more time and more to do! 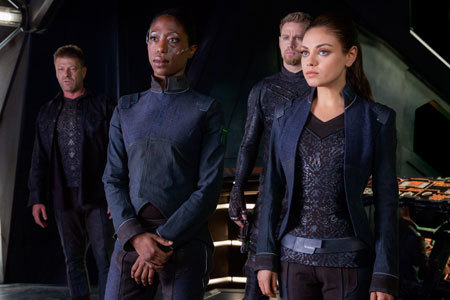 I would have loved even to just see this group of characters functioning as a team.
Image from http://www.kidzworld.com/article/29238-jupiter-ascending-movie-review

Different people involved would mean different strategies. Different and varied dialog. It also could have meant more sacrifice on their parts, meant higher stakes. Overall it would have made things much more interesting.

And honestly, as the Marvel movies (again back to Guardians of the Galaxy) showed us last year, movies like this can work without having to have a romance as well. Captain America and Black Widow were just fine together, and Star Lord and Gamora did well too. Jupiter Ascending could have benefited from the same idea – or even just stuck with the one good moment between Jupiter and Caine, the very end.

It was a space opera without purpose, another movie for the Wachowskis to tell us it might be bad for us to consider human life as a commodity, a kinda-chosen-one film. It felt like the Wachowskis again trying to create something visually that they figure no one else can copy – and again being proven wrong.

Oh, and Sean Bean didn’t die! In a horrible way! That is phenomenally rare.

At least, when you’re not laughing at the rocket skates.