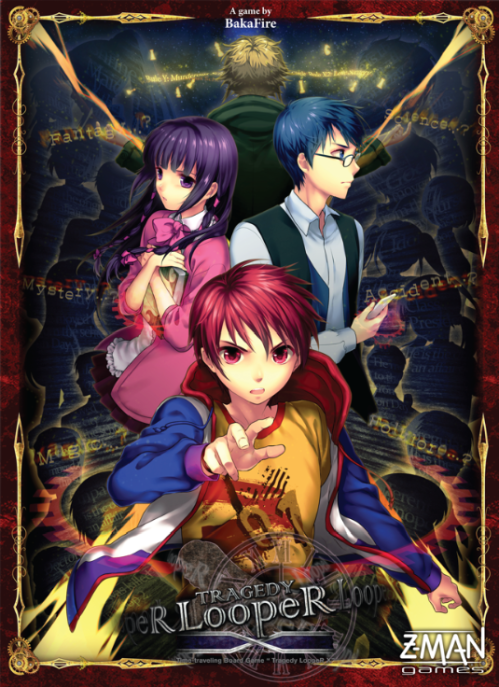 This weekend David and I participated in and volunteered at a local gaming con where we discovered a brand new game called Tragedy Looper. This is a great one against many deduction game that really gets the idea of what might happen if you looped back in time to try and change what happened. The only thing to remember is that you have one person trying to make sure that certain things do happen. The great thing is that you basically have a lot of different combinations that you can go through to create the whole script for the game. The players of the game are the protagonists of the story trying to influence a cast of characters, who they are also trying to figure out their true role in the story. Is the character just a regular person or are they the killer you need to stop, and you have only so many days and so many loops of those days to solve the mystery and stop the mastermind.

The idea of the time loop game really was what made me excited about this game and it did not disappoint. Part of what each different scenario or script sets up is the number of loops that players have to beat the mastermind and the number of days in each loop. The neat thing is that   the beginning of each loop it resets back to the starting positions and any paranoia, goodwill, or intrigue that has been built up goes away. Then each loop plays out differently because how the mastermind and the protagonists influence each of the characters in that particular story. The neat part about the story set up is also that it sets it up like the players have experienced the initial timeline and know that certain incidents could happen, but those incidents only occur on certain days and only if specific conditions are met. It really plays into the idea that by traveling back you are influencing and changing how events run or making sure that certain things still happen.

The non-player characters (NPCs) that are influenced by the protagonists and mastermind are part of the big mystery being uncovered. These characters have potentially hidden roles that could either help or hinder the protagonists. The mastermind knows all of the roles and everything that is going to happen and uses that knowledge to make things happen. One of the interesting part of the NPCs is that each has a goodwill ability that they can use if the protagonists build up enough goodwill with them. At the same time depending on the role that the NPC has they might be able to refuse to do ask the protagonists ask them and might be able to cause bad things to happen. Part of the reason that you want to figure out the role is to figure out who you want to add goodwill to so that you can actually use their ability instead of being refused.

The amount of things that have to be figured out makes this a complex and fun game. The other part that is really nice is there is a scale for how difficult you want to make the game. This is nice because for learning the game you can start easy and ramp up the difficulty. Part of what I really love is the story elements, there are some problematic mechanics to the game, which is actually covered quite thoroughly over on GeekDad.com.

This entry was posted in Board Games, Time Travel and tagged Board Game, deduction game, one versus many, time travel, Tragedy Looper. Bookmark the permalink.