It’s no surprise I suppose, given all the posts we did in advance of it, and all the pictures I posted on our new Instagram. Still! this last weekend was the Platypus Con, and we were there all three days! A gaming con through-and-through, it was full of board games, card games, and war games.

We’re tired, and honestly, I don’t have a lot to add on it.  I played a lot of Warmachine – my job was to be there and demo it, after all. These were the first games I played on the full, real 4×4 game board – you have a lot more board to worry about then! We also played a couple of our largest games yet, before going back to really low points – including a game against a new player who just got his army! I am now 3-3 against my friend who got me into the game!

Holly spent most of her time at the convention in the Lending Library, a massive collection of games. They had this set up with a system with a scanner, to really check out the games to people, tied to their tickets. And the number of games? So many. And people really were coming in, grabbing games, trying them out, and playing. 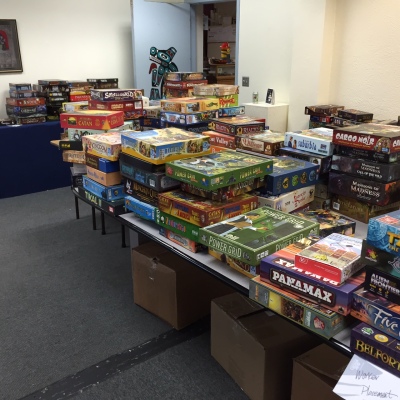 The convention was really well attended, and planning has begun already for next year! There’s a lot I think that can be done with a second year – once people see it’s been successful. During the con, people were realizing they could come in and use the space to game – so right next to us playing Warmachine, a couple of guys showed up and played a 3000 point game of Warhammer Fantasy! I think there are a lot of gamers and gaming groups in town that can hopefully do something more for next year’s event. Including, hopefully, some more Warmachine and Hordes players!

Holly is going to tell you tomorrow about the game that we found and played at the Con, but I’ll leave that to her tomorrow!