The Hobbit: The Battle of the Five Armies, a LitFlix

I’ve been less than impressed with Peter Jackson’s film adaptations of The Hobbit. That’s why I have written so little about them. I didn’t even see the first movie on the big screen because I had a bad feeling about it. 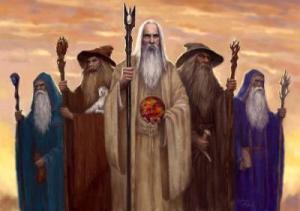 Turns out, I was right. Jackson lost me  early in An Unexpected Journey with his buffonish characterization of Radagast the Brown. He unsuspended my disblief with that unfortunate bit of scripting and never truly regained it. I mean, come on. I’m generous with creative license where film adaptations of books are concerned, but there is no possible world in which one of these guys can be a buffoon.

That said, an invitation to write a LitFlix on the third film for CompGeeks was just too good to pass up. I got myself to the theater on Tuesday and gave it a watch. Then I re-read the last four chapters of The Hobbit on Wednesday night while I awaited the arrival of a certain jolly old elf.

The Battle of the Five Armies is an awesome fantasy action movie. It was more than worth the ticket price – and the two and half hours I spent watching – on the strength of the fight choreography alone. The production is beautiful. It will suck you right into Jackson’s version of Middle Earth. I applaud the artistry, but the adaptation could be better. Do allow me to explain. (That’s the fun part, right?)