The Incal – A Comics Review 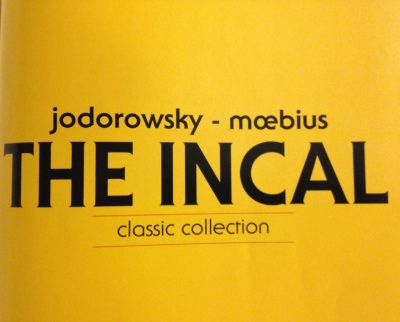 I have finished reading The Incal! This graphic novel was a fascinating look into the heart of inspiration. I wrote a first impressions post about this comic. And my inspiration for reading it was the documentary Jodorowsky’s Dune. So with all of this thought I’ve put into it already… what more do I have to say?

I think the right approach is probably just a plain old review, going through the story a bit, and looking at it. One of the things I was really expecting was to see the echoes of a lot of other stories, hidden in its pages. However, as this series is about as old as I am, I think the end result is that it felt familiar, but did not point to anything in particular. I think this is partially because it – like Jodorowsky’s failed Dune – has been permeating any number of science fiction stories I have encountered in my life!

However, the two that I was most expecting to see – Dune itself, and The Fifth Element, which got into trouble (nearly) for being close to The Incal – I saw a whole bunch in the pages of The Incal. So I’ll go through these movements, explore a bit of my surprise at the ending… but first, let me take a minute with the story’s main character, John DiFool. Spoilers abound for the hard-to-find, expensive-to-buy, The Incal!

John DiFool – The Man With No Analog

So for as much as The Incal is this piece that has inspired others, as much as it comes out of ideas for a movie about Dune and as much as it has a place in the Space Opera sub-genre of Science Fiction, you’d really expect there to be this stellar, almost archetypical main character. 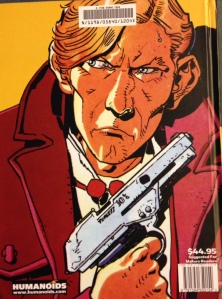 He looks much cooler on the cover, believe you me.

I was continually surprised to find this was not the case! What we got instead was an Everyman, or at least, an Everyman if you assume that the Everyman is lazy, and wants little more out of life than drugs and prostitutes. He regularly has chances to be heroic, and regularly mucks it up – he only makes it through because of his friends (generally the ones throwing him in harm’s way), and/or the Incal itself.

He seems not to have any character growth, either. The others come to learn and accept things, but to the last, John DiFool is resistant to this and has the same basic needs. Even when a whole world ends up as his children – they are just copies of these same attitudes, writ large, and clearly deliberate.

He’s not inspiring. He’s not heroic. He’s not a Dune analog, no Atreides man. He’s not Bruce Willis in The Fifth Element. He’s just a man, caught up in this mess, with an unimpressive pass, no strong connection to the future or the universe in general, and he’s really just kind of there.

He doesn’t even really stand in for the audience – he is instead the butt of the jokes, the comic relief. I think we, like the other characters, are supposed to laugh (or at least sigh in exasperation) at the antics of John DiFool.

So from page 1, I could see connections to The Fifth Element. It opens with John DiFool falling through the flying cars of a future city, towards a ground that is filthy enough it would kill him before impact. He’s no Leeloo, but the scene is there. 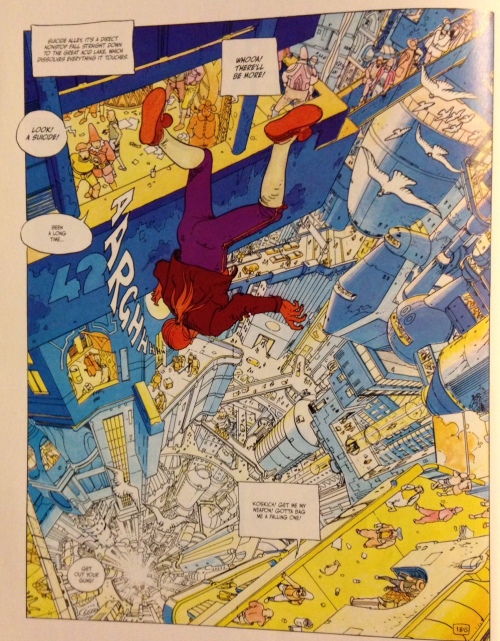 It continues for quite some time like this – a scene that seems completely familiar from The Fifth Element, but used entirely differently from how it was used in the story of The Fifth Element. To the point where I agree with how the court case turned out: not really a copy. What you can say about it is, most definitely, the same artist was involved in both projects. You can see Moebius stamped across both of these stories.

Some other similarities are things like the Technopriests and their dark eggs, which remind of Zorg and Mr. Shadow:

Or then there’s the constant babble from a character to viewers at home – in the comic it’s the President, disembodied and fighting inside a giant, deadly robot (the Necrodroid); in the movie, it’s the media personality, Ruby Rod. 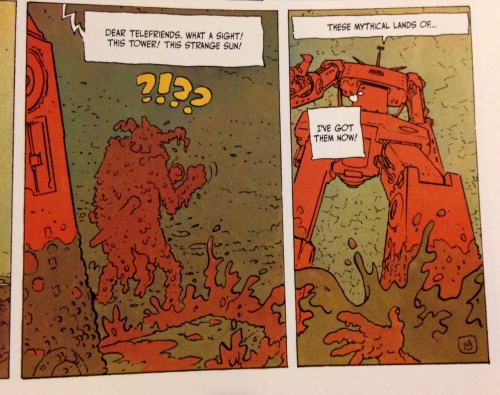 And the perfect being is an ideal of a perfectly androgynous person; there is an almost conjoined-twin aspect that rules the galaxy like this (the Emperoress), but then we end up with an even greater version later… It feels like a bit of the inspiration for LeeLoo, and also like a segue into talking about Dune… 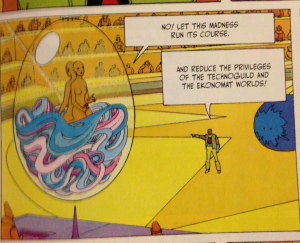 It didn’t start like this, but eventually, The Incal felt quite a bit like Dune. It started, really, with an image of the evil baron – remind you of anyone?

An evil baron who faces off, and bends to his will, a character who seems like a cross between Yueh and Thufir Hawat:

A Million Deaths were not enough for Yueh…

From there, we got into more spiritual stuff, mind-enhancing elements, a bunch of warriors who start to seem like the uniquely skilled Atreides, the skilled soldiers of the government that seem like Sardukar, and eventually, giant monsters that get tamed and used for war: 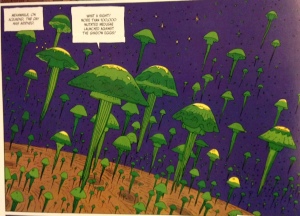 Space Jellyfish rather than Sand Worms, but you get the picture.

To be fair, I’m ready to look at just about anything and say it’s Just Like Dune. I said so of Lucy last week. And something based on storyboards from a Dune film? I’m sure to make the comparison.

But like I said with John DiFool – he’s not an example of one of the characters from Dune. His son, Solune, ends up as the great Androgyny, and melds with the Incal itself: 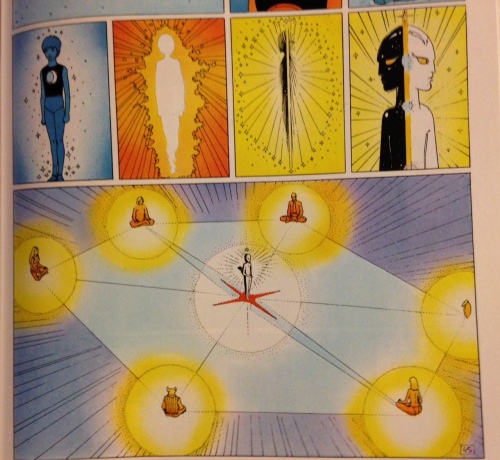 He is the Kwisatz Haderach in this tale. Does that leave John DiFool as a failed Duke Leto? He could have at least had the decency to die in the first hundred pages, then…

A Surprise at the End

There was one more comparison I could make at the end, one I was not expecting until, in the last few pages, it all came together. And one that, to make the comparison, would lead to spoilers. So be ye warned. If you want to skip the spoilers, I have them book-ended between pictures… 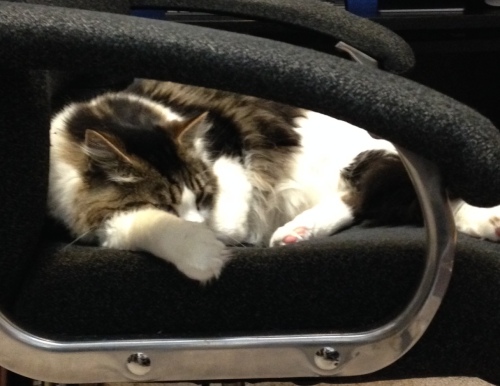 The end reminds me of the end of Stephen King’s 7-book epic, The Dark Tower. I don’t want to say much more than this, for fear of spoiling you on two classic epics at once. And if you’ve read one of these, I guess I just spoiled the other. But… I warned you! 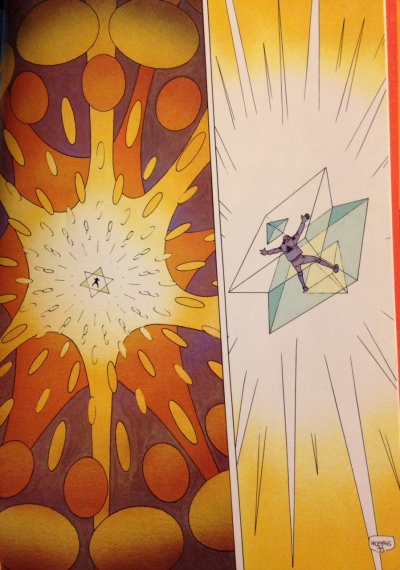 So what’s my takeaway from The Incal? It was hard to track down, and would have been very expensive to buy (moreso now when I look – I’m thinking other people had the same idea after seeing Jodorowsky’s Dune!). So if I make a strong recommendation, what am I really asking of you? 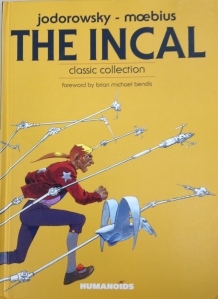 If you love the influence of stories and media on one another, I recommend Jodorowsky’s Dune, which came out to buy recently. Really good – I just recommended it to my library to buy! It’s an amazing story, and a well-presented documentary. All around good stuff.

If you love comics and graphic novels, this may not be the best ones to read, maybe especially at this price. If you want a large, meta sort of comic to read, definitely check out Watchmen if you haven’t.

And if you’re a Dune-o-phile like me, and you love movies like The Fifth Element and Lucy, and you’ve seen Jodorowsky’s Dune, you probably don’t need me to tell you that hunting down this comic will be a fascinating read – it would be worth the work and wait!

I still really do recommend trying to get your hands on it through the library, if you do want to read it. Or better yet, do what I’m also doing – and hope they reprint this whole collection again sometime soon! Or digital???

Images copyright Jodorowsky and Moebius, from The Incal: Classic Collection published by Humanoids, 2011.

10 responses to “The Incal – A Comics Review”