Why Lucy is a Good Science Fiction Movie

Yesterday Holly gave a spoiler-free review of the movie Lucy, by Luc Besson and starring Scarlett Johansson. In the tradition of our Comparative Opinions posts, I thought I would give a different perspective: a post with far more spoilers!

Before I get into spoilers, though, my thought is that Lucy was a few things. It was an artistic film, which Holly compared to The Fountain. It was a science fiction film, rather than an action film. And as a philosophical film, it felt very French.

We linked to the SourceFed Nerd review of the film, and I want to include it here now. They spent 16 minutes talking about this movie, way longer than usual. I think on one hand, it shows that they were paying attention – they point out a lot of the contentious elements of the film, a lot of the reason why it has a mixed response from audiences and reviewers. I think on another hand, it shows that the film got people thinking, and talking about it, and that seems deliberate. And finally, I think it shows, like Holly discussed yesterday, that the marketing for this movie completely failed. It did not set the right expectations for what the film would be or be about.

So these are the topics I want to talk about – spoilers to follow!

The Whole 10% of the Brain Thing

The biggest contention they had on SourceFed Nerd – and the biggest concern we had going into the film – was the whole, basic premise. The line that humans only use 10% of their brain – and Lucy was going to unlock the rest.

I think that the marketing, the trailers and all, set us up for this. It was the expectation. And we were gritting our teeth at this – at the thought that this was going to be the whole explanation, and then all the action would ensue.

However, I would argue this is not what it was. In fact, we don’t even remember the line about 10% of the brain actually making it in the movie. If it was there, it wasn’t the point. Morgan Freeman, as the scientist, isn’t talking about accessing just the brain – but the entire nervous system. The neurons throughout the whole body. He makes an analogy that a single body has more neurons than there are stars in the galaxy – being able to access and use all of that, having consciousness and control of them… that really would be something.

“Okay, maybe I could have explained that better.”

They maybe didn’t do this well enough, though. Not well enough to get past the ads, to get past everyone’s expectations. So the idea of the whole 10% thing stuck in a lot of people’s minds, despite the fact that they clearly point out that they mean something more.

They could have shown us better in the movie. I think my imagination filled in some of the gaps. For instance, Lucy should have had control over things like adrenaline, of pain suppression. She says she doesn’t feel pain anymore, but they don’t make this clear. She could have stopped her own heart.

A few throw-away lines explaining these sorts of ideas, to explain how she had full access to her whole body, could have gone a long way in getting past the problems people had with this point in the film. And it’s an important point, since it is the basis of the film!

So What Type of Science Fiction Is It?

I feel like I’ve gotten some new ways to look at Science Fiction films and stories lately, things we’ve talked about on the blog.

One was Jodorowsky’s Dune, the documentary about the little science fiction film that couldn’t. The other was the EMP Museum and their Science Fiction exhibit. They organized the exhibit around the themes and common stories of Science Fiction – and Lucy fits squarely within one of these.

So let me look at these aspects to create a fuller picture!

Tales of the Super Human

One of the uniting themes of Science Fiction, and one of the areas at the EMP Museum, was tales about humans becoming something more than they are now. Scientifically, it flows from a lot of ideas, maybe especially of evolution. At one end, it works in with ideas like eugenics and cloning. At another end, it’s mutants and Heroes and super heroes.

Lucy not only is completely a film in this type of Science Fiction, it is an exploration of this entire genre. Lucy herself moves through the whole genre, becoming more and more a super being, and exploring the idea of human potential throughout this process.

I can compare her to other super characters throughout this genre – so let’s go through the list! 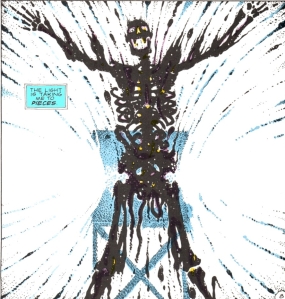 Well, that and an overdose of a consciousness-enhancing drug.

And just like that, we see that Lucy is very much akin to Dune. Given that making a film about Dune is exceedingly difficult, I don’t think that this is a bad thing. Instead, I would say that Lucy is an attempt to show what it would be like to become this sort of super being, to see the past, the future, the universe, and to understand it. It is, for me, an exploration of Dune. Which is one of the best things it could be.

However, with seeing Jodorowsky’s Dune, my understanding of Dune, and the media which are similar to it (which I frequently describe as Just Like Dune), has increased. And there is a direct link from Dune to Lucy.

It starts with Jodorowsky’s failed film, and follows into his graphic novel, The Incal (which I just finished reading). The Incal used a lot of the themes and ideas from Dune, and from the storyboards for the film. From The Incal, we get to Luc Besson’s Science Fiction masterpiece, The Fifth Element. This film is very much like The Incal. So much so that the film was sued for being too much like the graphic novel (without being directly and financially tied to it). The Incal’s artist (and Dune‘s before that), Moebius, worked on The Fifth Element as well. And from there, we get Luc Besson stepping back into science fiction, and we get Lucy.

So of course there are elements of Dune, and it also explains some of the aspects which feel a bit like Jodorowsky’s extra spiritual understanding of the story. In fact, the end of Lucy is basically the ending to Jodorowsky’s Dune film: the super being disassociates and becomes one with the planet, become the consciousness of the planet.

Here again is another aspect, to bring me back to the beginning, that SourceFed Nerd and audiences had a problem with. No, she doesn’t just become a space flash drive. She becomes the consciousness of the planet. Because this is, after all, Just Like Dune.

Sorry, that’s a lot of discussion of this film. If you haven’t seen it – and have read to this point – then know that this is a heavy science fiction film, this is an artistic film. Trying to explain an idea like the Kwisatz Haderach on screen is hard – heck, in a book it’s hard. On screen it should be almost impossible.

So Besson uses more than words – he uses images too. There’s a lot of great visuals, and this is one of the things that they liked on SourceFed Nerd as well. Metaphor and visual ideas. Then there were moments where they really just tried to give words to the experience, and Scarlett Johansson was a great choice for this sort of role.

My favorite scene was maybe the one where she calls her mom. Yes, it gets silly at one point, as they point out on SourceFed Nerd as well. She’s trying to tell her mom what she feels, tries to put it in words. Trying to make at least one person understand. Someone she cares about. And tries to explain she now remembers her whole life, in perfect clarity. All the way back to birth. And yes, there are things we’re not meant to remember. But it’s what would happen.

If you like Dune, or philosophical science fiction, I do say, give this movie a go. If you’ve seen it, tell me what you think now in the comments below! And if you’re looking for a Luc Besson-style action movie, a-la The Transporter or Taken, then I’m sorry, this is not that film.

10 responses to “Why Lucy is a Good Science Fiction Movie”