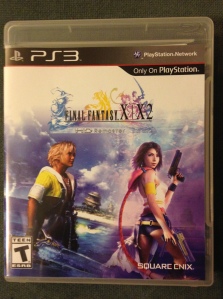 So Holly recently completed Final Fantasy X, and I watched her replay it most of the way through. One of the things that struck me most was the organized religion in the game. I had been trying to think of a way to do a Science Fiction and Religion post about Final Fantasy, and I think that focusing on X is the way to go.

I’ll close out with a video about Final Fantasy and Religion that I’ve been wanting to include in a post at some point, to wrap it up with a bow! Minor Final Fantasy spoilers, and a bit more for X, after the jump!

Final Fantasy games are full of recurring elements, many of which are religious or mythological creatures that show up as summonable allies, as well as mythical weapons like Excalibur or Gungnir. However, Final Fantasy X included an internal game religion in a way that the previous games do not.

However, in many ways, I feel like they’ve gotten stuck on religion since this game. In Final Fantasy XII, you eventually encounter the council of “gods” of your world, who have been trying to pull the strings, and you defy them. (I may need to replay that one… my recap seems weak! Holly points out that the main plot in XII is a war between nations, with betrayal and intrigue). In Final Fantasy XIII it’s very important that the creator made humans… and made Fal’Cie, which are basically giant sentient machines or monsters, that help make the world run for the humans. As you get into the game’s sequels, you get way more invested in the deities: Etro, goddess of death who ironically dies in Final Fantasy XIII-2, and Bhunivelze, the creator god.

We’ll see if XV follows this trend, or finally breaks away from it. Regardless, I’m showcasing all of these Final Fantasy games because it shows that they are, in part, hunting around and exploring the ideas of what the big world crisis could be, of what the biggest and baddest villain could be. By XIII we finally actually have full-fledged gods that we’re dealing with and, I think it is appropriate, in XIII-2 we lose. I would assume in Lightning Returns we can win finally, but we haven’t beat it yet, so I don’t know. No spoilers!

In some ways, where do they go from here? They’ve had us fight and deal with the biggest, baddest thing that you could think of – maybe it’s time to get back smaller and personal, something VII did pretty well, with Avalanche and your little eco-terrorist cell. I guess we’ll see!

Back to Final Fantasy X

Whoa, sorry, that was a whole lot of Final Fantasy geekery. If you can’t tell, I love the series and enjoy the games for both system and story. 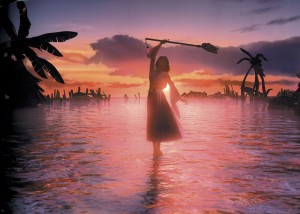 Final Fantasy X didn’t just include religious elements – it included a fully-formed organized religion. The worshipers of Yevon believed that the giant, world-killing monster – subtly named Sin – was a punishment for society’s transgressions. The main punishment? Constantly having villages destroyed. The crime? 1000 years ago, they totally used some technology.

This makes the technology-using Al Bhed in the game into the outcasts and red-herring-villains. So there’s a bit of a religion-versus-science argument in the game, that comes down on the side of science – but this is from the same game series that gave us VII, where technology and advancement (and exploitation of resources) is the villain.

As such, while it is the most fully realized religion in the series, with actual priests, temples, rituals and rites, and even the respectful bow that they do 1000 times in the game – it’s still a pretty simplistic religion. Sin and punishment and trying to lead a simple, good life. Kind of boring, right?

Of course, later in the game you find out that there are secrets that have been kept. The monsters in the games – called Fiends in this installment – are the incarnation of the dead who have not been Sent (religious ritual) when they died. In Game of Thrones terms, they died and nobody burnt the body.

Not everyone ends up a Fiend, however. Some people end up, instead, living on as themselves. Basically, as immortal ghosts. And as the game goes on, you find out that more and more of the leadership of the world – of the church of Yevon – is undead.

Let me put this in perspective: rather than being a religion based on the teachings and traditions of dead men, this is a church literally run by those dead men.

You also find out more about the whole cycle of Sin – it comes, destroys, a summoner summons the Final Aeon to defeat Sin, and it returns years later. Returns because the people still weren’t good? Nope, returns because the deity himself, Yu Yevon, is asleep – asleep and dreaming of Sin. And, in time, he reshapes the Final Aeon – a sacrificed friend of the summoner – into the new Sin. The cycle repeats itself, and is brought about precisely because the people have hope and belief and faith – they repeat the same rituals, and keep creating their own worst nightmare. 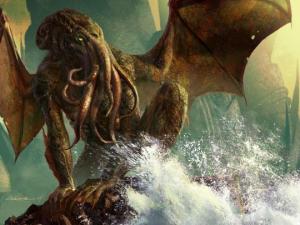 So really, the deity in X is pretty much Cthulhu – asleep and dreaming, letting horrors out into the world. With mad cultists, forcing the rituals and worship of their dark god – knowing the truth of what this horrible beast is, but doing nothing to stop it because they’re too deeply in with it.

So this all adds up to feeling, now, like an indictment on religion from the folks at Final Fantasy. Empty rituals, repeated endlessly out of habit and unrewarded faith and hope, that creates our own evils.

First, that the Final Fantasy games have a habit of making a large aspect of society, of power, into the backdrop for the plot and the conflict. If you’re going to do that, of course a ruling religion should come up – it’s an important part of history, and a logical source of conflict for the game series.

Second, they present a really shallow religion. When things start going badly, all Wakka has to fall back on is saying “This can’t be happening” over and over again. The whole system was a sham, continued because of the hope of the cycle ending, that maybe this time… That hope is the sort of thing that most stories seem to tell us would make us human. But eventually, you reach a point where you know enough to stop a cycle like that. Heck, that’s the plot to the Mass Effect trilogy – eventually the cycle can be broken.

So third, then, is that there truly were problems with the religion, and it truly held them back, kept Sin reappearing, and basically held their society in their own Dark Ages for 1000 years. Afterwards (in the sequel X-2), turning to the Al Bhed who did not forget their past helps them to push forward into their future. So X-2 is a renaissance. I like that in X-2 there are still people who want to continue the church of Yevon – now New Yevon. I also like that you get the choice of whether to be for them or against.

So I think, rather than this game being a scathing indictment on religion, it is a simple exploration of a simple religion (Cthulhu worship more than anything…) that likely leads to a future society with more knowledge, diverse opinions, etc. So all-in-all, a pretty well-handled religion, if it feels like it fits historically.

I’m not the only one who’s thought about Final Fantasy and religion, however. Holly and I found this video a while back, and I have apparently been sitting on it waiting for a time to include it. This seems like as good a place as any!

To sum up (though it’s a pretty good video if you have the inclination!), culturally, large-scale organized religion, as well as Western religious beliefs, are both a bit… foreign… in Japan. Thus, both them having no problem including it as the conflict, and the simplicity of the religion created. Though to be fair, it’s pretty complicated in fiction terms!

What do you think? Is Final Fantasy anti-religious? Anti-god? Or more just agnostic? Let me know what you think in the comments below!

7 responses to “Final Fantasy and Religion”