Fantasy Worlds at the EMP Museum

One of the other exhibits we saw at the EMP Museum was the Fantasy: Worlds of Myth and Magic.  I love Science Fiction and Fantasy. Both of these genres have the ability to transport you to an entire new world. I discussed the Horror exhibit yesterday and that was fantastic. The Fantasy exhibit was so much better partly because I got to totally geek out on my fandoms, but it was also a really interesting exhibit. One of the best parts of the exhibit is that you are literally transported to a new world hidden behind a door. The door looks so innocuous and at first we were not even sure if it was the way in and not just a display. Then you open the door and it is like stepping through the door to Narnia or running through the column to platform 9 3/4. You are suddenly in a place where magic can happen. 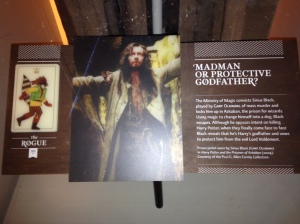 The first part of the exhibit introduces you to the Archetypes of Fantasy. It is the list of all the types of characters that you will find in a Fantasy story. The way they introduced them was actually having you take a quiz to figure out which of the archetypes that you belong with, but you can also click on each one to read about each one. As you went through each archetype you got to see the characters from Fantasy stories that represent each of them. The best part was that they actually had video clips of characters from the movies. It was so great because the clips just brought you straight to those characters and who they were. Then as you were walking around and looking at the various costumes and artifacts of various characters they would have their archetype listed next to their information. (One thing I particularly appreciated was that at least one woman was shown in each archetype that was not designated as specifically female.)

The next part of the exhibit discussed building Fantasy Worlds. It is not only about building the environments that make up the worlds, with the costumes, castles, looks, but also the maps that are created. One of the great pieces was being able to create your own map. They had an interactive game where you could create maps for a variety of different Fantasy worlds. Then you could look at the worlds that other people had created and even name the world whatever you wanted to. It was a fun exercise in thinking about how hard it would to actually just create a new world and map with locations. It would be incredible to create a whole map from scratch, thinking of land masses, castles, mountains, rivers, etc, and then deciding on the location names. 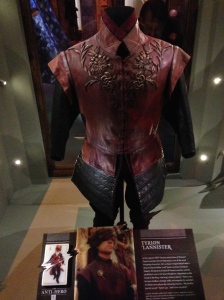 Of course the really fun reason to go to the exhibit is all the neat artifacts from the various movies and tv shows that we love. There was a little bit of everything, which is part of what was so great. Pretty much whichever type of fantasy you were in to there was probably something for you. It had various costumes and the swords were really neat. It is always interesting to see costumes and props outside of their movie moments. It was a great time to be able to complete geek out.

8 responses to “Fantasy Worlds at the EMP Museum”