A to Z Reaction and All The Things in April!

Last week we finished up the April A to Z blogging challenge, with 26 Character Studies! We hope you enjoyed them; we certainly had a good time writing them. Welcome to all our new followers from the challenge, and thank you to everyone who stopped by and were reading and commenting! 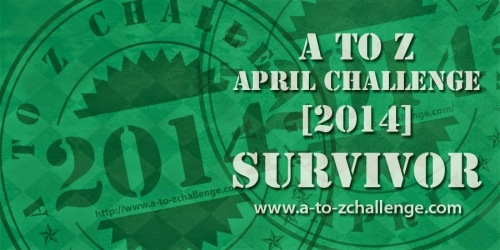 Of course, what this also means is we have a whole month of things that have been happening that we have left pretty much untouched. We did a post for International TableTop Day, but otherwise it was the challenge.

And then we went on a weekend trip to Seattle, to visit our friends and occasional guest bloggers @Odorunara and @Briantific. They each did a great guest post – Leah on Hannibal, which we now have to watch (sounds pretty good!), and Brian on ESO, in which he has gotten much further than we have and has taught us much of what we know about the game. Thank you again to them, and make sure you read their posts!

This Month (and beyond!) on Comparative Geeks

I think this calls for a bulleted list. Or a few. Onwards!

I think that’s enough for now, but there’s that and more in the weeks to come! So I guess this was a taste of our blog for those of you who have found us through the challenge, as well as an acknowledgement that we’re working on getting back to business as usual, and have a lot to say!

Have any thoughts on what you really want to see, or recommendations for more? Let us know in the comments below!

6 responses to “A to Z Reaction and All The Things in April!”