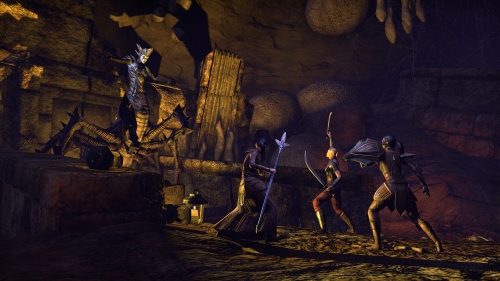 Is it still Elder Scrolls?

One of the hallmarks of the Elder Scrolls series is the constant trickle of self-improvement based on your character’s actions. Many (if not most) games follow a fairly strict leveling model inherited from their pen-and-paper forebearers; you work to gain experience points (XP or EXP), and, at pre-defined intervals, these points mean you gain a level. When you gain a level, your character’s statistics improve and they may gain new abilities. This is meant to reflect the way a person gets better at something with practice. This method is the best tabletop could reasonably do without requiring (even more) constant math. On a computer you can make the process more gradual and organic, and this as long been a distinctive feature of the Elder Scrolls series.

In ES, leveling is only the most basic of processes. The real improvement comes from tiny use-based increases in dozens of skills. Do you sneak around a lot? You get better at stealth. Throw fireballs at everything that moves? You get better at fire magic. Despite the occasional absurdities that can come from abuse (I’m looking at you, jump skill), it’s a great concept that really makes it feel like your character is growing through effort instead of being spontaneously given more power every so often. 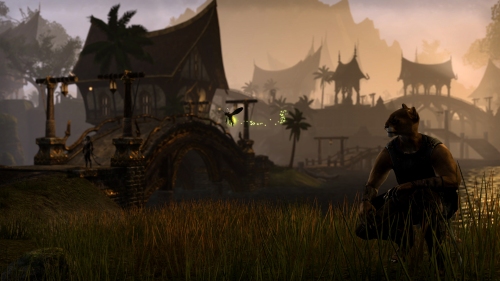 Stealthy Khajiit. That torchbug will never see you coming.

Does it work in ESO? I’m going to say… mostly. The general rule seems to be that combat and crafting are still improved by use, but the way you get around the world has been removed from the skill tree. Jumping remains unchanging and stealth can be improved by gaining points in other skills. I can understand why the creators changed this aspect, but I miss the tiny thrill that comes from sneaking up behind an enemy in the single-player games and seeing that skill point increase that means you successfully hid from that enemy.

Single-Player Story in an MMO World

By putting everyone on the same continent on the same server, ESO does away with the usual problem of being on the wrong server to play with your friends. Players are then placed in parallel planes of existence based on server load. At peak hours, there are lots of instanced layers of a given zone. When fewer players are online, there may only be a few. By balancing the players this way, they solve both a major Elder Scrolls problem and a major off-peak MMO problem. In ESO, you’re never alone for long. The world never feels empty. Loot and resources are generously shared, so despite being surrounded by other players, you don’t feel like others are stealing a spawn you needed or otherwise impeding your progress. I’m still not sure how this was accomplished technically, but it works well.

Tell RealCaptainTightpants to right-click on my name and choose Teleport to Player to sync with us.

The instancing used to create the megaserver is interwoven with the game’s approach to storytelling. As you progress through the stories in the game, both major and minor, content from objects to landmarks is phased to show you that your actions have an immediate and lasting effect on the world. Light something on fire and it will be either still on fire or a burned ruin the next time you visit the area. Leave the population of a town to die and future visits to that town will be really tug at your heartstrings and make you question your heroism.

I first saw this technique in World of Warcraft’s Wrath of the Lich King expansion, but ESO does it on a much finer level. In this way, ESO overcomes the usual MMO problem of maintaining a global status quo for all players at the expense of individual stories – you won’t kill an enemy general in a huge cinematic battle only to see him still pacing the ramparts day after day (unless the story has a reason for it).

I haven’t played enough group content to understand how this works when you’re playing with other people, but for the solo game, it’s a beautiful thing.

Will I play ESO as long as I played FFXI or WoW? Only time will tell, but feeling that I really can affect change in the game world will keep me playing at least until I finish the story from all three alliances’ points of view.

All images sourced from the Official website for The Elder Scrolls Online.