B is for Bucky Barnes

I have been reading up for my Captain America: The Winter Soldier LitFlix, and have been learning more about Cap and his world. Agent Carter, Nick Fury, SHIELD, the Red Skull, Falcon, the Winter Soldier, the Invaders, and Bucky Barnes. The comics are from about a decade ago that seem to relate to the upcoming film, and really to the last film as well… And these comics, meanwhile, hearkened back a lot to the earlier days of Captain America, fighting in World War II with Bucky.

So I’ve been intrigued by Bucky, and the differences they’ve done with him in the movie, so I thought I would talk about that briefly, and in advance of Captain America: The Winter Soldier. Spoilers and possible spoilers after the jump!

Back in the Day 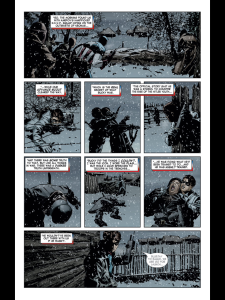 So one of the fascinating things I’ve found about Bucky is that he was not, originally, an old friend of Steve Rogers, Captain America. He was a bit younger. He was someone who probably could have been another Captain America, had they still had the technology to create another super soldier. Or he might have been the backup plan if Cap had failed.

Young and impulsive like Steve had been, he was a scrapper. However, since they already had Captain America, and couldn’t duplicate him, they did something different with Bucky. They publicized the fact he was young; in the comics, they talk about him being a propaganda reaction against the Hitler Youth.

But it was Captain America who was in the limelight; that meant Bucky could do the sorts of things behind the scenes that Cap couldn’t do – could be the one doing more wetworks, black ops, what have you.

Or maybe, the better view is that Cap was the target. Literally, with his spangly shield. So everyone focuses their fire on him. He’s the tank. But then Bucky can actually get the job done, take down the big targets. For instance, in the comic series A+X, which is full of fun character one-shots, we see Cap and Bucky back in the day, visited by a time-traveling Cable. While Cable is busy focusing on Cap and the bad guys, and the bad guys are focusing on Cap as well, Bucky has gotten in place to take out the anachronistic sentinel.

And Cap says, that’s how they work. Cap is the distraction – the sort you can’t ignore – and Bucky gets the job done.

That makes Bucky one of the better sidekicks out there, in my books. Because it sounds like, a lot of their missions would not have worked without him.

Because as you may know, the idea in the comics is that the Winter Soldier is Bucky. He was saved from death, and preserved over time somewhat like Cap. The bad guys got him – hoping that his successes had come from him having some of the super serum like Captain America. They find out he does not – he’s just an ordinary, but highly skilled, man.

So they put those skills to use, making a Russian assassin out of him. And really, given we don’t see Bucky actually die in the first Captain America movie, I could definitely see it working in the upcoming film that way.

How far into the depths of the comics will they go with him in the movies, though? Are they going to kill Steve Rogers, and have Bucky Barnes take his place? I guess we’ll just have to see!

10 responses to “B is for Bucky Barnes”