Okay, so actually maybe the worst. Or there was this written review over on the Mary Sue: http://www.themarysue.com/300-rise-of-an-empire-review/

So Holly and I have decided, especially with how many movies there are coming out this month, we have better things to do with our time than see 300: Rise of an Empire in theaters. Maybe we’ll rent it later on and I can weigh in? For now, how about some comparison of film and graphic novel? On to 300!

I don’t think I had actually watched 300 since seeing it originally in theaters. My strongest memories aren’t even formed by the film itself, but instead the amazing trailer for the PG version of the film:

Oh man, so good. So quotable. Brush your teeth!

Ahem, but onwards. This movie was ridiculous, full of set-piece type scenes, slow motion, action, and abs. It was also one of the early successes of Zack Snyder, who, despite the geek hubbub that usually crops around his films, is a director I really like. However, I prefer Sucker Punch and Watchmen to 300 – but without 300, would any of us know who Zack Snyder is?

That was the thing with this movie: it definitely had an artistic feel to it, definitely had an aesthetic to it. Yes, the things within it were ridiculous, but they were intentionally that way. Ridiculous as in over-the-top, in just about every way.

So what led to them making this movie this way? 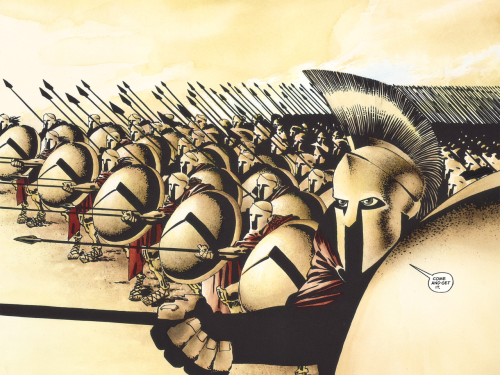 Oh wait, I think I know exactly why 300 was made the way it was. Because now I’ve read the graphic novel. Now I’ve rewatched the movie. Now I know.

300 was shot in such a way as to invoke the comic. Moreso even than Watchmen, which I felt did a pretty darn good job of adapting that story. Many of the slow motion shots seemed like a chance to try to give you a still moment where you almost see the comic on the screen. The still image.

So for instance, then, this CinemaSins video came out recently:

And it was an interesting CinemaSins. For this one, I feel I now have an answer to most of the questions he asks. Why did the things happen the way they did? Because they happened that way in the comic. Why did the terrain seem to change, suddenly looking entirely different? Is it an editing problem? No. It’s trying to capture a shot from the comic, like this: 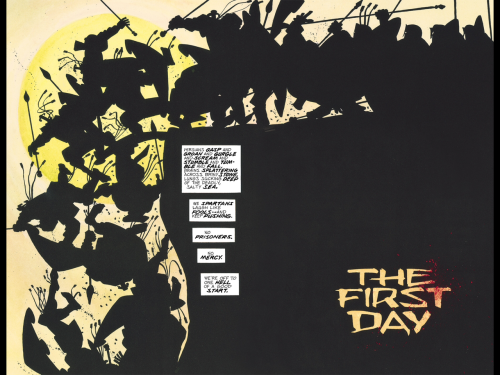 From 300 by Frank Miller. Not the similar-looking scene from the movie.

In terms of movies based on comics, this one is one of the most faithful. Almost too much so: it lacks much of any adaptation of its own. As such, I am now particularly surprised that a sequel, with no source material, was created.

Differences between the two

Now, that’s not to say there were no differences. In particular, all of the scenes that take us back to Sparta, back to the Queen and the traitor in their midst. Lena Headey is pretty excellent, and is apparently typecast as a Queen? There are worse things than adding more of her. Although, where the two stories intersect, her and the traitor, you end up with some of the problematic sorts of things you apparently see in the second movie.

In fact, the other main thing I feel was added in the movie also fits this mold: in the comic, there are naked men, but not really actually much with the women. The movie reverses this: naked women, and generally clothed (well, ish) men.

It’s almost like there was a second set of thought in the first movie, that was like, let’s add some weird stuff about the Queen and a traitor and sex, and some topless women… and then, it’s like that voice was the one that created the second movie. And then, they kept the action and all to remind you of the first film.

I would be interested in any of your opinions on the second film if you’ve seen it – let me know in the comments below!