Catching Up – The Killing Joke

So recently Holly and I borrowed a friend’s copy of the famous Batman comic, The Killing Joke. I have not read many Batman comics, but Batman has ended up in more media than other heroes, so I feel still like I know him pretty well. Between different movie series, TV shows – live and animated – and excellent video games, there’s really just a lot of Batman out there. 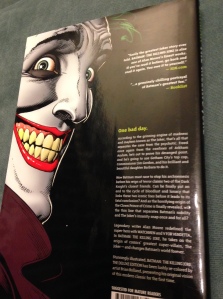 The back cover to the Killing Joke.

But as part of taking a step back from my saturation in Marvel comics, this seemed like a great comic to read. And as a quick review, I have to say: it was excellent. Good art, good story. It had some things I’ve been missing from Batman lately – say, in the Christopher Nolan movies. Batman talking more while in costume. Crazy thought, right? And the faces of the Joker in this are really well done.

Since this comic is now over 25 years old, I guess I can treat it as though spoilers are not an issue. However, I will still try to be careful. So let me lay it out for you to consider, in case you haven’t read this comic and are thinking about doing so. I am going to introduce what it is that’s apparently the big events in this comic. The story that hadn’t been told before. Then, I’m going to consider this in comparison to a movie that I feel has a lot of similarities: The Dark Knight. And then, I want to consider the ending, which will be the most spoilery of course. Also, because we read the “Deluxe Edition” graphic novel, some of that may not have been in the original, but it’s fascinating nonetheless.

Apparently – The Origin Story of the Joker

So going in to reading this comic, I did not realize that what it is most known for is that it first told the origin story of the Joker. Given that since then, this origin story has been told several times, such as in the Tim Burton Batman, I think the animated series, and I feel like in some of the video games… it wasn’t hitting me as a first-time sort of event.

I’ve also read a bit about this origin recently as part of the Batman series over on Sourcerer, so they’ve done a better job looking at this than I could, as a Batman comics novice. But overall, these flashes back to the past were not, for me, the best parts of the comic.

For one thing, this comic is likely the origin story of another DC character: Oracle. This happens when the Joker shoots a major character, Barbara Gordon, leaving her paralyzed. After this, she turns to her computer skills and is, if anything, a more interesting character than when she was Batgirl.

Vs. – The Dark Knight

Reading this comic, I was definitely thinking of The Dark Knight. There are two major points in the comic which match up, that are comparison points. And there’s one big difference – in the comic, they give the Joker’s origin story; in The Dark Knight, they kept him mysterious, like he had been in the 40+ years before The Killing Joke. 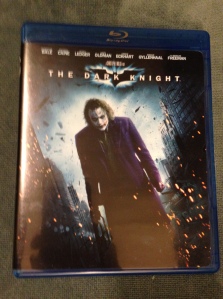 The first point, and what the comic opens with, is the idea that Batman and the Joker are moving inevitably to a point where one of them will kill the other. That at some point it will go too far. That Batman will break and kill him, or some scheme of the Joker’s will be too much for Batman to handle. Or he’ll get bored. Or lucky.

It’s Batman who is making this point in the comic, however; in the movie, it’s the Joker, with a twist – he argues they’ll never kill each other. They use this sort of speech as the Joker’s goodbye speech at the end of the movie, banking on the power it has. But it’s eerily similar. And it’s used well in the comic as well, coming back up as a “voice-over” in the comic, as the two fight.

The other major point of comparison between the two is the Joker’s plan. He believes he can break anyone, and make them mad like him. In the movie, he tries (and halfway succeeds) with Harvey Dent; in the comic, he tries (and fails) with Commissioner Gordon.

And the good guys are left trying to prove that their way works – that they can be good, can not kill, and still win. That he didn’t set up an unwinnable scenario, that he wasn’t controlling their actions, that he can’t break their morals, that he can’t make others as mad as he is.

While there are differences between how this plays out – and the movie has a lot more time to develop this – it is still a very similar scheme.

So here’s where I really get into spoilers. Because while I’ve talked about the things happening int he comic, it’s what the Joker does, what he says, how they get there, that is the reason to read this. But now, my initial thoughts from reading this.

Before I found out that this was the origin story of the Joker, I realized more what was up with this. Because at first, I thought the big deal was the end, was the Joker and Batman laughing together, sharing a joke. Which was a fascinating scene – even just the fact that they were able to talk civilly with each other for a minute.

Instead, this scene really just works like in The Dark Knight – the thought that these two might be locked in combat, forever.

And then, in the Deluxe edition at least – and maybe the original? – there is an added short comic after that. In this comic, a normal guy, a Batman fan, is talking about how Batman is going to die. It’s not going to be one of his villains who kills him. Not some exotic scheme by the Joker. No.

It’s going to be him. Some normal guy, no criminal history. A single bullet. For no particular reason.

This was such an interesting way to end this, to juxtapose with what happened with the Joker. The Joker, who would never really kill Batman. He’s just too much fun.

This entry was posted in Catching Up, Comics, Movies and tagged Batman, Oracle, Sourcerer, The Dark Knight, The Joker, The Killing Joke. Bookmark the permalink.

One response to “Catching Up – The Killing Joke”