Geek 501 – The Guardians of the Galaxy

If you were like basically everyone at the announcement that Marvel was releasing a Guardians of the Galaxy movie, and asked yourself who they were – then this post may be for you. I do not profess to be an expert on this comic or these characters; indeed, I was just as confused at the announcement as the next geek and comic reader.

Marvel has recognized this and is doing what they can to introduce the characters to people who are interested. And even for those only mildly interested, they’re structuring their trailers to show the characters as well. So I thought that they were ripe for introduction. The basics are here in the trailer, but below, I’ll give a bit more on each character!

Marvel has been sharing information about these characters in two main ways – one in the movie trailers, and there’s one for each character. The other way is through the comics. This is a pretty young group – the current configuration only started in 2008. So they recently did a bit of an origin or character point story for each, leading up to the start of the new run of the Guardians of the Galaxy. So I will consider both of these, and recommend both to you if you want to know a bit more about the characters! 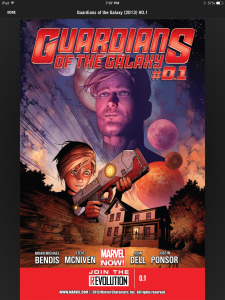 Cover for Guardians of the Galaxy 0.1. Screenshot from Marvel Unlimited.

You may have heard of him.

The idea of Starlord, or Peter Quill, is that he is the normal guy – no powers, raised on Earth, the whole bit. He is us, caught up on a grand galactic adventure.

According to the recent comic introduction, in what they called issue 0.1 of the Marvel Now! Guardians of the Galaxy, Starlord is only half human. The other half is Spartax. This basically human looking alien race is also not one of the biggest names in the Marvel universe, and it might be a bit much to include them in the movie – after all, they’re introducing the Kree and probably a lot of other aliens – so I would expect Starlord to be all human.

I just saw The Lego Movie, and that starred Chris Pratt too… This character also looks like he is going to be a major source of humor – and the sort of humor we’ll get. He’ll ground the film for us. Because I could see some of the other characters going for humor too… we’re just not going to get it…

From the Guardians of the Galaxy Infinite Comic #2.

I think the casting of Bradley Cooper as Rocket Raccoon is going to be fantastic. Rocket Raccoon is one of the more ridiculous of Marvel characters, a genetically modified space raccoon – the only one of his kind – who is sarcastic, makes references that humans don’t get, and kills things a lot.

No, really, the “Rocket” part of his name is serious. He uses all the big guns – usually bigger than he is.

All the backstory they really gave for him in his comic intro, in the Guardians of the Galaxy Infinite Comic focusing on him, is his wonderment at the thought that there might be another raccoon like him. This is also something I doubt we touch in the movie – mostly, he is going to be a ridiculous badass.

If you thought Vin Diesel belonged in a Marvel movie, you’re getting your wish. However, if you expected him to be a huge tree creature, well… he is Groot.

From the Guardians of the Galaxy Infinite Comic #4

“I am Groot” might be all this character says… and he’s going to be entirely CG… so going with a big name actor is intriguing. Hopefully they did motion capture, and he’ll move like an action star (Vin Diesel), and be gravelly and awesome.

Groot can grow and regrow from a tiny sprout or piece of himself – meaning he is not only the muscle (in a group full of muscle), but he can regrow. So he’s effectively invincible – he’s the Wolverine of the group. This is something I hope they take advantage of in the movie – destroy him and show Rocket, all concerned over his friend, saving a small sliver and regrowing him.

Drax is the character with the longest history and most backstory of these characters. He showed up in the original Infinity Gauntlet to fight Thanos then, and has history against him. However, I doubt that his history is going to be at all an element of the film as well – so he should be minimal baggage coming in to this.

“I basically am Drax,” says Dave Bautista, and I’m not going to argue with him. Drax – and especially Drax once he joins the Guardians of the Galaxy – is effectively a wrestler. In his Infinite Comic, he pretty much just has a bar fight. And it’s excellent.

From Guardians of the Galaxy Infinite Comic #1

For a group that’s mostly filled with muscle characters, Drax fits right in. The question is, what more will they do with his character? Bautista was one of the most fleshed out characters in Riddick, and I think he can do a good job here.

Rounding out the group is the only lady, but also the most lethal of the crew. Gamora… well, I think she’s the one most likely to have an important backstory from the comics in the movie.

Gamora is not only the most dangerous woman in the galaxy, as the comic points out to us, but also the daughter of Thanos. Thanos, who you saw at the end of The Avengers. Thanos, who we are hoping makes an appearance in Guardians of the Galaxy. If there’s a way in to the plot for Thanos, I think it’s through Gamora. Alternately, if there’s a way to draw the Guardians of the Galaxy into the Avengers movie we’re going to have with Thanos, it’s through Gamora.

As a side note, why doesn’t Gamora really come up during Marvel’s Infinity crossover this last fall? But I digress.

I’m also pretty sure that she’s fighting Nebula in the clips here – but I think I’ll stick with the team and I guess we’ll leave all these villains alone.

Zoe Saldana sounds excited to play Gamora, so that works for me. Should be good.

On the Marvel App they have the combined collection of the Infinite Comics for $3.99, so that’s one way to get at them.

And there’s plenty of people writing about them, so blogs are another way to go. For instance, over on Sourcerer there was a great intro post to them as well, with some recommendations on other comics to read for Marvel’s cosmic storylines.

I am going to be reading a whole bunch of Guardians of the Galaxy comics, meanwhile, for my LitFlix on the movie, so at some point this year I know I at least will know much more. Most everything you’d want to read of them is available through the Marvel Unlimited subscription service, and also on the Marvel App for a little less than the subscription cost.

And for a last thought, I imagine Marvel will keep giving us videos on these characters, so that they hopefully won’t spend the whole movie trying to introduce who these characters are. So you can always check these out on the Marvel YouTube channel!

Have more insights or recommended reading for the Guardians of the Galaxy? Let us know in the comments below!