I have finally completed both games now in the Halo 3… franchise? Series? What do you call it? Anyway, Halo 3 and Halo 3 ODST, and they were pretty fun games. It reminded me of the joy of the Halo games, the excellent story and gameplay they combined to make some of the definitive FPS experiences.

I don’t tend to play the realistic shooters (Call of Duty, Modern Warfare, these sorts of things), and so Halo, Timesplitters, or Borderlands are more my sort of game. The stories that can be built once you’re freed from the real world sorts of conflicts and interplay are interesting. I’m not looking for the violence, or for the mulitplayer; I’ll take story and co-op. And playing through the Halo 3 games I wasn’t co-op: so just the story, then.

So while the gameplay elements are all there to make Halo 3 like the two previous installments, by the end I realized they had ended up leaning on a crutch to complete their story, and it kind of bothered me. So then, I got to playing Halo 3 ODST and the larger cast of characters was fun, and nostalgic of Firefly (as I mentioned the other day). But then, they reminded me of a character I was missing: the female captain, voiced by Tricia Helfer. Both games dip into an interesting place regarding their female characters, and so I thought I would consider both games here on Friday, as part of the larger Feminist Friday movement. What happened to my Halo games? Spoilers for much of Halo!

So first, I think I need to harken back to a couple of posts Holly and I wrote a while back.

Love her or hate her, Anita Sarkeesian presents a way of looking at video games that, now that I’ve watched her videos, I find myself referring to. However, as I said in my blog post, one of the frustrating things is that falling back to an old, archetypical type of story, like the Damsel in Distress, is that it is just lazy storytelling.

So, if you can guess where I’m headed with things… did I find Damsels in Distress in the Halo games? Well, let’s look at the first two.

Halo: Combat Evolved was fun because they found a groove for their storytelling, made some great gameplay, and it was a new intellectual property in a new technological age that was all well executed. The story, for most levels, functioned in such a way that you had an objective, fought your way to it a little bit, got to the objective… and then had to fight your way back out, often against more dire odds, or with far fewer resources (ammo, health, backup) to rely on.

It was different from so many games, with the buildup to a boss fight, and then the objectives are achieved. And then you can generally walk back out, or getting out happens automatically or off-screen. No, in Halo, getting what you needed was only half the battle.

Then there were mysteries to figure out, several different groups of aliens, vehicles, shenanigans. I am a strong proponent of the campaign of Halo.

In this campaign, we also have a constant companion: the shipboard AI Cortana, who the main character, Master Chief, brings along in a chip in his armor. She provides communications, directions, analysis, and companionship for this lone-wolf powerhouse of a soldier. She is helpful rather than annoying – the game’s annoying sidekick award goes to 343 Guilty Spark – and a pretty well developed character.

Alright, so then there was Halo 2. By the end of the story, it does leave you going “aww man, middle of a trilogy, we didn’t get anywhere!” However, it has some strong points, though I prefer the first installment.

For one, you get to see more into the lives of your enemies, the Covenant. An alien army made up of many different species, we get to witness a schism as some of them do not like the direction that their leadership is going. We also get to play one of them: an elite branded as The Arbiter, a badass to rival Master Chief. The story alternates between playing these two main characters.

We also get to see into the assimilating, zombie/plant-like Flood, who are given an intelligent leader hivemind, as tends to happen with those sorts of groups – similar to, say, the addition of the Borg Queen ex post facto in Star Trek.

In this game, Cortana gets left behind amongst the enemies, but hey, she’s an AI, and she’s really hard to get rid of. Things are bad for everyone, and we’re left all cliffhangery and such for everyone. So again, nothing necessarily stands out with her, she was still a good character, all that. 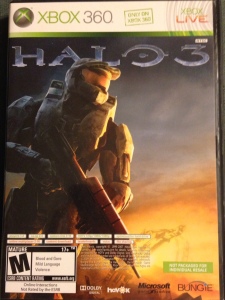 Alright, so context and backstory leading into Halo 3. In this game, play-wise, there’s a lot of similarity to the first two still, with levels where you still have the harder fight getting away from your objectives. There’s also some bigger more boss-feeling elements, like the Scarab Tanks, but hey, a big fight is fun.

I had to remind myself not to be annoyed at some of the parallels, as well. Yes, there’s going to be Halo rings – ringworlds built to contain and destroy the Flood. And yes, our characters have, by this point, gotten rather good at navigating and destroying these rings. So while there are parallels that felt like easy ways out – let’s go to the Cartographer, or meet me at the Control Room – these things make sense because our characters are pros by now.

Instead, Cortana is showing up as after-images, or maybe psychic or technological intrusions, but she’s gone and you spend much of the game not even really worrying about her. Maybe not expecting her to still be alive or salvageable. But then, all of a sudden, the enemy ship she’s on is around, we get to it, and we go off to rescue her.

And that’s when I feel like they all of a sudden heaped a couple of cop-outs on me. First, a Damsel in Distress. Cortana, a digital projection, is lying needing help, as though Master Chief can physically interact with her this sort of way. She looks like a Damsel in Distress – when, as an AI, there is no need for her to do so.

And then, by saving Cortana, we end up with a Deus Ex Machina. She happens to still have the detonation key from the first Halo ringworld, and can use it to detonate Halo.

But then, not before you fight 343 Guilty Spark as a final boss.

So it’s more than just a Damsel in Distress, but really, it’s just a weak trilogy ending. Easy storytelling elements. And not in keeping with the other Halo games. But by the end, I had to look back at Halo 3 and realize it was a Damsel in Distress story the whole time, and that we resolve the whole plot just by saving Cortana. Which I guess is supposed to make her strong or interesting? But no, not really.

And the part that I have left out of this discussion – because I’m focused more on the story elements of it – are the increasing sexualization of Cortana, as the graphics have improved. Which only increases it seems with Halo 4 and then into Halo 5. She eventually ends up as basically a naked blue lady, like Mystique in the X-Men movies. 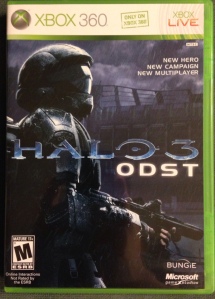 So I suppose I have less to say about this game because it stands alone, rather than being part of a larger series. It’s related to Halo 3, but it’s a spin-off title, with its own, new set of characters.

Meaning they had to introduce those characters, and with so many to introduce, they spent very little time with each of them. Every character ends up basically as a stereotype, enhanced by the fact that many of them are actors who are effectively typecast as those stereotypes, then. Almost reprising their characters from Firefly.

And then there’s the Captain, and intelligence officer (spy?), who is a female. And Tricia Helfer, a great voice actress. And… well, problematic. Because the team falls apart right off the bat, and one of the first missions, you hear from her over the comms – but fail to find or rescue her, and you don’t know if she’s escaped or dead or what.

You then proceed to play all of the rest of the team members, one by one saving themselves and being badasses. But not her. Then, when the team is all back together and they’re flying off, Nathan Fillion’s character realizes, wait, we forgot someone – and they head on back to save the girl.

It was at this point that I was basically like: you’ve got to be kidding me. I went into the next level hoping I would get to play her story then, play the tale of what she was up to, of her saving herself as well. Nope. You just run into her, and head on in to do a mission with her as your help (or you as hers?).

And then, she finds the creepy alien thing… and befriends it. What is supposed to be the hard-line intelligence officer. Is it because she is a woman that she has to befriend the animal-like creature? That we then have to fight to defend it and escort it back out of the city?

And then the team shows up – unnecessary at this point – to save her. The cavalry to the rescue, for the commanding officer… for the Damsel in Distress. It again just feels like falling back on simplistic storytelling. We don’t know what the point of the mission is until she supposedly tells us. But really, that means the point was just to save her. Because otherwise, all the guys accomplished in the majority of the game was surviving.

I don’t know if I’m making a lot out of not much, but in the end, I am just not as thrilled with these games as the previous Halo installments. I’m not bothered that I waited this long to play them, and I played through them fast enough that I am not overly annoyed. I am just moving on. I was thinking of playing Halo Reach next and then getting my hands on Halo 4, but I think for now I have enough other games that those can again wait… maybe years, as the Halo 3 games did. Because they failed to keep up the compelling storytelling from before, and while including new and different characters and situations, they added these things by falling back on archetypes and tropes. Too bad.

5 responses to “Halo 3 on Feminist Friday”