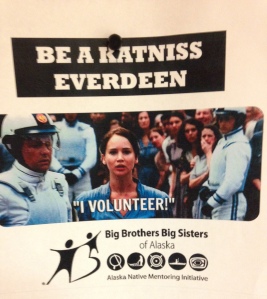 David showed me an interesting ad today and it got me thinking about how businesses will try and tap into something’s popularity even if they do not actually understand the underlying meaning of the media. In this specific ad Big Brothers / Big Sisters is using Katniss Everdeen to say that you should volunteer to be a big brother or big sister. They even used the scene where Katniss says “I volunteer!” as the image. It seems obvious that they understand that The Hunger Games is a hugely popular franchise and that there is a sisterly dynamic, but are completely missing the point.

I have not necessarily seen this sort of thing happen too many times, but I can understand why it happens. Why not use an already popular franchise to draw people in to your business or non-profit? It taps in to a market that already exists so that you can build off of an existing fan base instead of having to build from scratch. When you do not use the media appropriately it can come off as insulting and lazy.

It makes sense to use a popular media icon to try and build off of an existing fan base. We identify with the characters from our favorite shows in one way or another. So trying to say that those characters are connected to some idea makes sense to draw people in. There is a reason that McDonald’s puts a toy in with the happy meal. Sometimes it is about the kids just wanting the toy and not entirely about the food. If a gym wanted to make a poster telling people to become strong as Thor or the Army using Captain America as a new ad campaign. These are images that we understand and already relate to. They have meaning based on the stories, places, and media that we experienced them in, which can give instant recognition and tie in to the meanings from the image.

The biggest problem can happen when you know that something is popular, but do not actually know what the meaning of that something is. Take the Big Brothers Big Sister example. This is an organization that is meant to be about how much fun it can be to be a big and to have a little. The joy of being able to spend the time with children that need strong adults in their lives. To use Katniss Everdeen as the pinnacle of what being a big is about is just wrong. Katniss is amazing and I love her and while I would want some of her characteristics I would not want to be her. The things that she has to go through are horrible and yes it is all to protect her sister at first, but would you really want the idea to be that you have to go through a fight to the death to be a big? I know I wouldn’t. 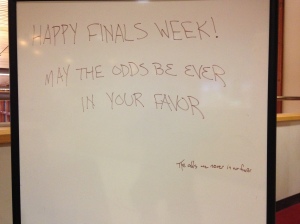 White board message during finals week at a university.

Another great example that we have of this is actually another kind of misuse of the Hunger Games. For finals at the local university someone made a sign that said “May the Odds Be Ever in Your Favor”. Now I know what they are trying to say because finals can be a pretty brutal time. At the same time using a line that is about a fight to the death and that there can only be one winner seems pretty cold for finals time. So only one will truly succeed during finals? The great response from a student of course was “the odds are never in our favor”. Now this is obviously an example of trying to be cute, but who obviously missed something in the message of the whole Hunger Games franchise.

There are ways to appropriate something in a meaningful way, but you have to respect the meaning inherent to the the piece. When we are talking about fictional characters that are popular a lot of times the misrepresentation or misuse just seems lazy. This is popular so it will garner attention, at the same time do I really want to volunteer or go to a company that does not think about the messages it is sending out in to the world? This was just Katniss Everdeen, but what about the appropriation of other cultural artifacts? If you cannot understand the layers of meaning behind a fictional character how are you even going to begin to grasp the layers of meaning behind different cultures? It just feels like cheap marketing and not meaningful engagement, which does not bode well for wanting to actually involve myself with your organization, whatever that might be.

2 responses to “Misuse of Popular Culture or Wow Really?!”