As we mentioned a few times here on the blog, our big Christmas present for the year was a PS3, complete with borrowing games from people, getting our hands on some of our own, and a membership with PlayStation Plus which has free games available.

Meanwhile, as you may have noticed around and about the end-of-year reviews lately, at least and especially on Apple, there’s this little game called XCOM: Enemy Unknown. Which on the Mac store has won game of the year, and for iPad, is runner up for game of the year. A game that is that high up for both of those platforms? Really? I wanted to know more when I saw it.

And I recognized the name – from our PlayStation Plus. This game is available free on PS3 with PlayStation Plus right now – whereas otherwise it’s still $40! This seemed like the perfect way to explore this game, and break in the new PS3. I have to say, then, that this game has sucked me in and stolen most of my game time since we got it. Read on for some of the fun aspects of this game, and for some wisdom from my play through! 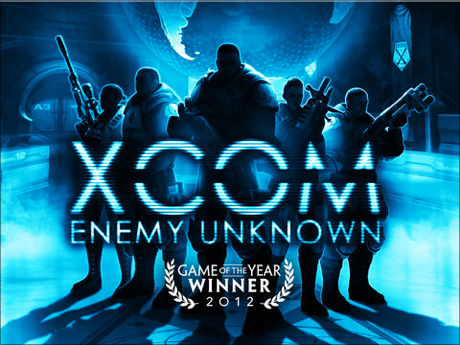 Game of the Year all the years! Screenshot from iTunes.

At its core, XCOM (the Extraterrestrial Combat unit, I think) is a science fiction story of an alien invasion of the Earth. It’s 2015, so not too much past today. Basic armor, guns, grenades for our soldiers. Planes with missiles. Pistols. We’re nowhere near ready to fight aliens, right?

And it goes as badly as you might expect. In the first mission, you lose almost everyone. Well, I did, anyway, I’m not sure how much it’s scripted. I walked out of that with one guy, barely hanging on.

Yeah, it’s kind of like that. Image from the Apple App Store.

And then, bit by bit, we start to learn more, about this unknown enemy (I see what they did there!). You kill enemies, bring back their weapons, armor, and even bodies. Autopsies, reverse engineering, interrogations… incrementally, bit by bit, you learn more. Advance more. Build more.

The Research and Development cycle in this game is really something. You collect resources, but they’re part of R&D, and you have to choose and prioritize your research. They take time, and manpower, so you have to figure out your strategy. Or keep fighting to get more.

All These Things That I’ve Done

But then, oh the things that you research! They’re dreams of science, of fiction. Invisibility. Flight. Psychic powers. 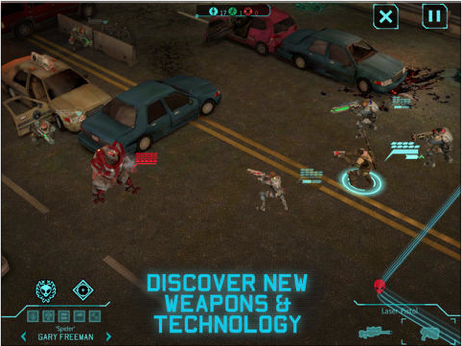 This is terrible team positioning. Found on the iTunes store.

Building up a good team that can handle all the situations is a lot of fun – but also a challenge! Injured soldiers have to recover over time, so you can’t just have one perfect team that you try to keep from dying.

And, while it’s a game with guns and shooting, it’s by no means a shooter. You don’t have to do any of the aiming to shoot – just to get your people in position and give them orders! Then it’s all math and percentages. Or if you don’t like that, just lob a grenade.

I think this is a lot of why this game has gotten so popular. Good story, good internal development cycle, and the skill it requires is strategic thinking, not manual dexterity. Until eventually, you have those turns where your enemies come running out and your whole team just reaction shoots at them and takes them out. Kapow!

What I Wish I Had Known

However, I was so busy focused on the combat encounters, on my team of soldiers and researching gear for them – and paying attention to all of these elements in the tutorial as well – that there was an element I didn’t pay much attention to. That I don’t think they really mentioned at all in the tutorial, either, and just left me in ignorance.

Still not doing well at, actually, and it’s still hurting me. And that element is the Interceptors – the fighter jets used against the UFOs.

They do the shooting for you… But you do need to have them in the first place! Found on http://www.joystiq.com/2012/07/30/exploring-the-unknown-parts-of-xcom-enemy-unknown/

I wish I had prioritized these far more. Also, I wish I had known even how to get more of these – as I was waiting for the tutorial to tell me how to get them, and didn’t hunt it out for a long time. It never happened, and things started going very poorly. You need your Interceptors to protect your satellites, and to shoot down UFOs, which are your source of most of the resources you need. And losing satellites panics nations, makes them leave the XCOM project and, like Pandemic, moves you towards losing the game.

So, yeah, definitely had a lot of that happen. Put me way behind, both in terms of R&D, and defense of the Earth. And there’s a simple solution. If you go into the Hangar menu, you build the Interceptors from there. Not somewhere in the Engineering Department, like I expected, and where you build the weapons for the Interceptors…

You can have your Interceptors built and dispatched directly to the continent you want them to defend. There’s options for moving them around, but you don’t need to do that really if you can build them right where you need them. Then, you can outfit them with new weapons you build in Engineering there.

And when you get the option to upgrade to an alien-craft inspired Interceptor? Do it. You’ll want that thing.

Have you played XCOM? What do you think? Let me know in the comments below!