You’ll probably recognize some of the things I’m excited for based on my other posts, so I’ll try to mix things up a bit as well. I’m also realizing a lot of it is movies, because they do the best job of advance notice and choosing a release date. On the other hand, a lot of the video games on the horizon are vague promises of a game, and a statement of which console they would be on – no release date.

But hey, movies have trailers, so I’ll include these, too! Join me in my excitement for the things coming up this coming year!

First, one of the things I am really excited for next year are the animated movies – there are several great ones coming out.

One is based on one of the shorts from Rocky and Bullwinkle – Mr. Peabody. Time travel and the folks who made How to Train Your Dragon. Sold.

However, these two I have a feeling of what to expect. The one I expect to surprise me the most is The Lego Movie. Given the humor they fit in to the video games – both with and without words – I am thinking this movie is going to be great.

Meaning it’s probably on Holly’s list as well, but still, this game is exciting. I still haven’t beaten XIII-2, actually, having instead watched Holly beat it. So I have a little over a month to beat it – good thing I don’t have a new console and things to distract me, right? Wait…

Previously, Final Fantasy games have been some of the last, great games on consoles… Final Fantasy XII was about the apex of what the PS2 could do, and say what you want about Final Fantasy IX, but the cutscenes – and on the PS1 – were amazing. I expect nothing less from Lightning Returns, as what may be the last new game we buy on this generation of consoles.

Broken Bells – After the Disco

My favorite band, Broken Bells, have a new album coming out this February, called After the Disco. They have had great music, great music videos, and I am excited for new music from them.

This is their first single from the album, and I’m liking it. Daft Punk’s most recent album has me thinking that modern takes on Disco music may not be a bad thing at all. I also love that the music video opens with the guy watching one of their previous videos, my favorite: 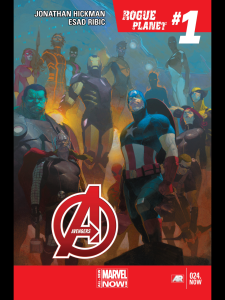 Marvel comics seems to be redesigning itself – again. None of their reboots of recent years have become quite as big a deal as the “New 52” from DC, I guess, and they feel the need to try to keep up. I did a post about their last two reboots – the Heroic Age, and Marvel NOW! – but it seems like they’re going ahead with “All New Marvel” and restarting some of the comics at issue 1 – and calling others issue 1, like Avengers 24.

However, I am still excited for Jonathan Hickman’s ongoing plots – in Avengers and New Avengers. He’s moving into a new phase of plots, if this most recent comic is any indication. That, and because he has to after Infinity…

And I also have picked up some Jonathan Hickman backlog reading I haven’t gotten to yet – some of his earlier, short series. And, some of his more recent work that I haven’t read yet – East of West, and I have more Manhattan Projects. And I’m waiting for a collected volume of his newest, God is Dead. When I love a creator’s work, I do tend to go a bit overboard and get all of it I can… that’s where I’m at with Hickman, and I’m looking forward to what I’m going to find.

There are 4 Marvel movies coming out this year – 4! From three different studios. They’re also all middle movies, so it’ll be interesting to see how they go. Well, almost all.

Days of Future Past is the one I am most excited for, and I think the hype they are doing around it may just have something to do with that. Of course, even this is not going to be the end of their plot… it seems they’re planning on more!

I’ll be looking at all of these comic movies soon, as we prep for our LitFlix for 2014!

The other video game we’re excited for that is, at least, mostly confirmed for this year is Dragon Age Inquisition. We were indifferent on Dragon Age 2 right up until the end, where they cliffhung us for Dragon Age 3. So we’re very excited.

Still not sure how they’re going to deal with importing your previous games… Dragon Age Keep? There’s rumors of these actually ending up on the older systems, so we could end up with it on our 360 after all. Who knows.

Because if it doesn’t end up on the 360, the other reason this game is exciting is because it will likely be the game that finally pushes us towards buying one of the new consoles – and we’ll have to decide then! Still not sure.

And, something I only just discovered, and am really looking forward to – Christopher Nolan’s next film, and a really big sort of project. There’s a dream behind it, an idea, that he wants to spark in the audience. At least, that’s what I get from the trailer.

Are our greatest accomplishments behind us? Or do things keep improving? I guess next year is one of those years to find out! Well, followed by the next year, and the one after that…

What are you looking forward to in 2014? Let us know in the comments below! And make sure to check back in a couple days for Holly’s list of things she’s excited for in 2014!