You Keep What You Kill – A Character Study of Riddick

Riddick. One of the most quintessentially badass characters in recent years. A character who has been through what is effectively a horror movie, in Pitch Black, to a space opera science fiction story in Chronicles of Riddick, and snapping back closer to horror in Riddick. 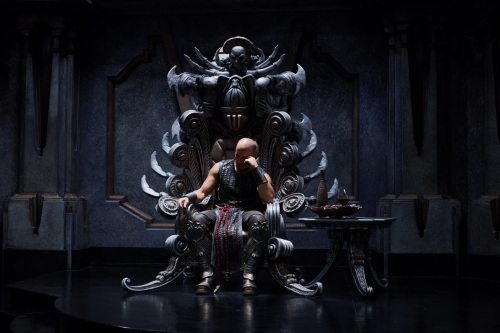 So we went to see Riddick this weekend, and it got me thinking about the character of Riddick. Because he isn’t the leading sort of man, and yet he ends up the object of the plots, despite himself. Wanted by bounty hunters and mercs, part of a prophecy which he fulfills just to escape it… what makes him so fascinating?

I’ll try to keep spoilers for Riddick minimal, so read on!

I’ll be honest, I haven’t rewatched the first two movies lately, like I have for some other things I’ve written up here on the blog. We caught part of Chronicles of Riddick on TV recently… as always, inevitably, the Crematoria scene.

However, I did watch the excellent CinemaSins take on these movies:

In some ways, the problems with these movies is that we have to take for granted that Riddick is a badass. They show us, too, but at first we’re going entirely on reputation. He has to spend the movies trying to prove it. So he does some pretty ridiculous things. They point out a few of my favorites on the CinemaSins videos – like killing the guy with the mug. Or, to quote, “Whaaaat?”

In both films, Riddick would be happy being left alone, it seems. Then again, he’s been bad enough to have a bounty on him – double if taken alive. And badass enough that his whole race was effectively killed so that no Furyan could kill the leader of the Necromongers. The fear of Riddick is great. And perhaps well deserved. But would any of this have happened if he had been left alone?

So who is this Riddick?

I don’t know how much I can really write for a character study of Riddick. Because honestly, I think the movie Riddick does the job for me. Especially the beginning of the movie. There is a long portion just of Riddick alone, being a badass.

Not necessarily what you expect from the trailers, but not at all a bad thing. Riddick is this incredibly introverted character, and spending a lot of time with him interacting with others doesn’t quite work fully. There’s a reason that Riddick does a lot of narrating in the first two movies – there are things he would think but not say.

They almost mess it up by adding people, but I guess it might not have worked as the science fiction version of Cast Away. Although, that is a movie I might see, if it were with Riddick.

I really recommend watching Riddick, especially if you like the character of Riddick. He is what makes all of these movies work. He is fascinating. Good when the situation is bad, and bad when he can get away with it.

I have gotten away from this a bit in my character studies, but one of my favorite ways to look at a character is with their D&D alignments. Appropriate, perhaps, since Vin Diesel plays D&D. And with Riddick, one answer really comes to mind.

Riddick is Chaotic Neutral. Any alignment often chosen by someone who just wants to do whatever they want with no rules, it’s an alignment that is actually kind of rare to really see. It takes being good or bad, as the situation dictates, and perhaps calling both of these extremes on their bullshit. Or at least, that’s how Riddick seems to approach life.

And he does not belong in the civilized world (universe). He makes this point in Riddick; that things got bad when he got too civilized. Law and order mean nothing for Riddick, and the enforcement of law and order can’t hold him.

So heroes can’t stop him; villains can’t kill him; the law can’t hold him. This is the definition of his badassitude, this is his character – in relationship to others, at least.

But who he is, himself, is perhaps a bit simpler than this. He is a survivor. As the last of his kind, he would kind of have to be. That would be who would be left. That, and he is an escape artist. This is the trait that he loves in his companion in Riddick – well, see the movie for yourself, and you’ll see.

Honestly, that’s a character I think a lot of people have tried to play in D&D – a chaotic-neutral escape-artist survivor. One who acts like he knows everything better than everyone else in the room, and with the skills to make this ego into reality. And maybe even with that voice. But it is here, with Riddick, that we see this archetype fulfilled.

Want more on Riddick? Holly did a piece on the movie a while back – check it out here.