Posted on September 9, 2013 by CompGeekHolly | 6 Comments

So being new in comics I was unaware of the types of awards that are given out for comics. I just knew as a thing that people read and had not quite paid much attention to the authors or artists. As I am slowly delving further into the world of comic books, because it is a world, I am finding that author and artist can make a different. If you find an author you like sticking with that author will probably lead toward a good option. The different writing and art styles have been so fascinating to see and just the different way people have chosen to tell their stories.

Back to the awards portion of our show, I recently found out that one of the comics that I recently read and am loving Hawkeye got nominated for seven Harvey Awards and even won Best Cover Artist. So I looked around some more and found the Eisner Awards and Hawkeye actually for Best Artist and Best Cover Artist. I know it is not my work, but it makes me really happy because I really enjoy it and it is nice to see that amongst other creators that it is considered good as well. So here are some of the things I have really enjoyed about it.

So I really appreciate why David Aja won for Best Cover Art and Best Artist. The art in this helps tell the story beautifully and while being evocative of older style comic illustration, it has a sleekness that makes it easy to look at. Hawkeye as a character is not one to sit still and the way this comic is drawn emits the scruffiness and grittiness that is Hawkeye.

I have not read all of them yet, but most of the stories have had little twists or turns. In the beginning they will usually show us some scene, completely out of context and then build to what is actually happening in that moment. It keeps you guessing as to what got them from point a to point b and Hawkeye usually seems to be on the losing side of the battle. It really helps to keep you engaged with the story.

Rough Around the Edges 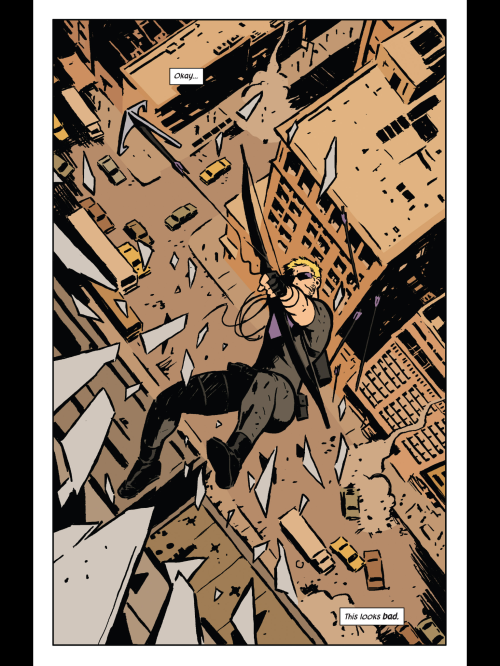 I could not figure out a better way to say this because Hawkeye is a good guy, but he is not a clean cut hero. At the same time he is not the anti-hero either. He seems to go in bow blazing and figures it out as he goes along. It seems part dumb luck, part amazing skill, and a little bit of genius. It is kind of amazing what he gets himself in to and then out of.

The biggest thing is that it is funny. If you are looking for a clean cut the good guy wins and saves the day go read Captain America. Hawkeye is kind of an every man hero and as such he makes wrong turns that often end up being hilarious. There are some visual jokes, some puns, and just the general nature of Hawkeye who acts first and asks questions later.

So I am super enjoying reading it and excited to see it getting some recognition. The other side of it is I noticed that most of the places it was nominated SAGA was also nominated and SAGA won most of its categories. Which means, I need to give SAGA a closer look and I have heard great things about Brian K. Vaughn so we shall see.

All images Copyright of Marvel