With our Science Fiction Today posts, we like to explore the ideas from Science Fiction and how they might come about in the world today, or in our near future. Because really, it’s more fun to think about today’s problems in terms of what they can become, rather than what they are now.

We’ve talked about transportation first in the face of the sequester, when they were worried about travel delays, and then when Holly was considering it after flying and having to wait. There are some advantages to flying – you can get stuff done, like reading, work, handheld games. Electronics have made this form of travel very versatile. Well, except for the take-off and landing…

I saw something this week that made me think about transportation a little bit differently, and I thought I would share it, continuing our ongoing consideration of science-fictional forms of transport – Today!

One of the ways we can see the future in transportation today is with Driverless Car technology – similar to unmanned drones, which keep showing up in movies and TV shows (or flying empty Iron Man suits, basically a super drone, right?). There’s a handy link with information on it: http://en.wikipedia.org/wiki/Google_driverless_car

Here we get to combine the ease of travel by, say, plane – where we can use electronics to get work done or relax – with the existing roadways and infrastructure we already have in the world. After all, flying cars sound great, but then are you suddenly having to have air-traffic controllers all over the world, watching daily, local travel?

I am super nervous about how this would work, really, but they have to start somewhere, and they have some of these cars on the road and they are working on the technology. I am super excited about the technology as well, because driving to work, reading up on stuff on my iPad? Comics, books, games… writing blog posts? I would take advantage of this time, for sure.

So the possibilities and uses are there. Really, the advantages sell themselves better than, say, tablets sold themselves. Remember when everyone was trying to figure out what they would use a tablet for if they got one? Now their presence is growing. I can see now what I would do with a driverless car. And the technology might be a thing well within my lifetime – well, ubiquitous within my lifetime. It’s already out there.

But what are the consequences of that?

What Driverless Cars Mean for the Transportation Industry

What got me thinking about driverless cars was the above video from Philip Defranco in his daily show just the other day. It’s his first piece, and runs from about 0:20 to 2:30. Because he is excited about this – more than me, I imagine, by a long shot. After all, he has Google Glass – and he lives in Southern California, so I can’t really compete with the traffic he likely drives in every day!

The question that he got to thinking about, and then that I would like to consider, is what happens to the people whose line of work is transportation? After all, when I think about a driverless car, I’m thinking about my personal vehicle – going from home to other places in a car that drives itself. Sounds fantastic.

But then, what about other transportation? The bus? That would probably end up driverless. Taxis? Yeah, most likely. The trucking industry? Definitely. And would it stop there? Or if we got used to it, would we start to see drone-style pilotless commercial airplanes? Trains, for sure. Light-rails and things like that.

Would a move to driverless technology wipe out a huge number of jobs? The answer might be yes. Then again, would the potential for productivity increase – and possible safety increase from not being distracted by phones, or impaired by alcohol – make up for this?

The World of Robots 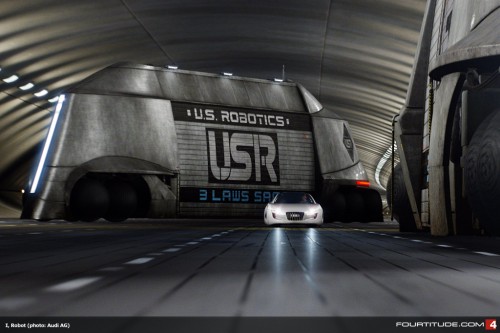 Slave labor, as much as it is awful and we hate it, led to some people having a really easy life, where they thought of a lot of ideas and made some crazy stuff. Robots, in Science Fiction, regularly end up in the slave situation. On the one hand, what you end up seeing is that potentially all of humanity could be equal – could all have a better life, an easier life, through robots. The cost is the robots as slaves, and when the Singularity comes, this regularly is a huge problem.

It’s like the scene in I, Robot – will we, with driverless cars, end up at the mercy of robots one day, as they take over and drive our cars, with us in them?

Or, will the trajectory we already see in history continue – will technology just replace humans in terms of the work that we do, and replace most of the jobs in the transportation industry? I guess time will tell, and it may not be very much time!