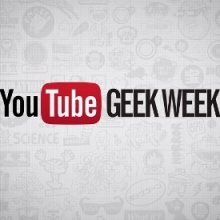 Holly and I were talking last night about how YouTube has reached a point of feeling so pervasive, of having been something that’s always been there. But YouTube started in 2005 – not yet a decade even.

These days, when we share videos with each other, it’s all YouTube. When we want to share a video with you here on the blog, it’s usually all from YouTube. But back in the day, we were watching Internet videos, too, and they weren’t on YouTube, but other sites, like Albino Black Sheep and Ebaum’s World, and Flash creators, like HomeStar Runner and Amy Winfrey.

So I haven’t watched much from Geek Week, because a lot of what I’ve seen is stuff on the normal channels I watch with a Geek Week label, like a new TableTop on Geek & Sundry, and an hour-long Table Talk on SourceFed Nerd. So instead of giving you Geek Week, let’s look back at highlights from BYT – Before YouTube! Warning: some videos NSFW.

So, this is one of those videos you watch with friends so you can quote it together. No, okay, I suppose they all are.

I was reminded of this video recently when they watched it on YouTubers React. I remember this from back in high school, and in college, where various lines from it were thrown out and quoted all the time. This is one of the early hits, so much so that it won an Oscar. In some ways, it’s harder to accomplish something like that now – because there are so many more videos out there now, that one being found or doing something new in terms of video and animation is more difficult.

One of my favorite creators from the before times is Amy Winfrey. She started with Muffin Films, and so did I. Then moved on to Big Bunny, and Making Fiends. Making Fiends even ended up as an animated show on Nickelodeon.

One of my favorite episodes of Making Fiends – the song at the end is fantastic. And I definitely sing it sometimes to our cats.

One of the things that’s still a hit on YouTube, or even occasionally on TV specials, is funny commercials. Heck, they devote a whole  Big Game to them.

Right? That’s what the game is all about, right?

Here are a couple of my favorites that we would quote constantly in college:

I haven’t heard this video quoted since earlier today! There was a time when I could probably quote this whole video, and that time might still be today.

This is one of the most quotable videos I’ve ever seen. It doesn’t get much better than this. If you haven’t seen it before, add it to your repertoire. People still remember this one.

Red vs Blue was such a great idea: use a bit of video game graphics and video game plot to make satire. The animating is kind of done for you, then; although I’m sure the editing was a beast. Using Halo and tapping into what turned into one of the most popular video game franchises out there probably helped, especially being there when Halo was at its biggest.

I watched the first season or two of Red vs Blue, at least until they were getting into Halo 2 graphics. I see they’re on to season 10… they’ve kept it going! I recommend the first ten episodes or so, at least, as it sets up the humor great… Right up to the first death. I love the end of the episode, talking about how someone… will… die…

They have embedding turned off, but here’s a link to get you going with season one: http://www.youtube.com/watch?v=9BAM9fgV-ts&feature=share&list=SP49C4397CE9AC5260

All Your Base (Are Belong to Us)

One of the great early examples of what the Internet could be – that is to say, a place filled with Memes – most geeks and a lot of other people know what All Your Base is. A fantastically bad video game translation, that the powers of the Internet, sharing, photo editing, viral spreading… It is one of the earliest examples of phenomenon we take completely for granted today.

HomeStar Runner – “And the Dragon comes in the Niiiiiiiiiight!”

The saddest thing to go with the slow death of Flash is the sort of video that was the bread and butter over at HomeStar Runner. Amy Winfrey did amazing work, but nobody in this field was better known than Strong Bad and the crew over at http://homestarrunner.com/ Sadly, watching these on YouTube loses the Easter Eggs that were the heart of the experience with Flash – so the real place to watch these is over on their website!

This is the classic, this is where most people get into HomeStar Runner. If you have not watched these videos, watch this!

Here’s one of my favorites. This I know I can quote from start to finish, and for no particularly good reason. I love The Cheat’s videos, and this is his best one.

And here is the start to one of the best off-shoot series they did: Teen Girl Squad! Teen Girl Squad led to me still, to this day, taking words and adding a ‘d to make it into a verb. Generally, an attack verb.

What other videos from BYT do you remember, love, quote, and share with your friends still today?