Science Fiction and Religion – The Hitchhiker’s Guide to the Galaxy

I initially started writing about Science Fiction as it relates to Religion in terms of aliens – and how the existence of aliens might do a lot to prove or disprove religions. There are a lot more science fiction worlds I could look at and discuss this point, and I may at some point in the future. However, a truly intelligent alien race, that was around well before us, is an entirely different train of thought.

And that leads me to today’s topic: Intelligent Design. A common theme in science fiction, the creation of humanity as the result of alien influence. Seen prominently recently in Prometheus, this thought comes up a lot, and while it doesn’t prove anything – the fiction aspect of the phrase – it does pose some hard scientific questions. 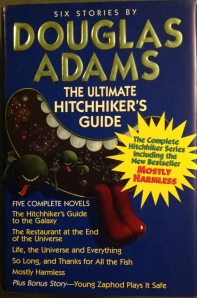 So let’s go with the best example of this: The Hitchhiker’s Guide to the Galaxy by Douglas Adams.

Why have a stuffy intellectual conversation or a self-righteous religious one when we can have a fun conversation? If you haven’t read the Hitchhiker’s Guide to the Galaxy, go do it. If you prefer audio books, Holly loved listening to it with Stephen Fry narrating. It is a good time, a fantastic parody, but with some solid thought that went into it too, which is a lot of its lasting appeal. So let’s take a look at what Douglas Adams did with Religion.

In the Hitchhiker’s Guide to the Galaxy, the Earth is two million years old. It was created as a giant, organic super-computer, processing away at the meaning of Life, the Universe, and Everything. Well, rather, at the question: the answer, as you’ve probably heard, is 42.

Unfortunately, the Earth is destroyed just before the answer would have been fully computed, and construction is begun on a second Earth. Here we get to see the process of the Earth’s creation: teams of people working on topographical details (the second Earth will have many more fjords…), on geological and fossil records, on everything it takes so that the people who will then inhabit this planet believe fully that it had been there for far longer, that it was a natural creation.

Intelligent Design [noun]: The theory that life, or the universe, cannot have arisen by chance and was designed and created by some intelligent entity.

Try to disprove it

What it comes down to for me is that Douglas Adams has created here a scenario for the creation of human life, and of the Earth that, as ridiculous as it sounds and as much as I don’t believe in it – as much as all of that, can it be disproved?

After all, if perfectly aged dinosaur skeletons and all the rest are placed, the geologic record is created, landscape diversity… You could, with knowledge of how evolution works, or the idea of evolution, and access to the right materials, create the illusion of evolution. If you were a ridiculous alien race, that is.

Or one really intelligent designer.

All this is to say, if we can’t disprove the parody of the Earth’s creation, how on Earth could we go about disproving the religions that postulate similar sorts of claims?

I am not saying that I necessarily believe that the world was created in this fashion. That’s not the point of this little thought experiment – it’s not about me. However, whenever someone talks about a scientific proof against religion, I just think of Douglas Adams, and of scientific proof planted for us to believe.

Any disproof of religion is still solidly science fiction.