Star Trek Into Darkness – A LitFlix 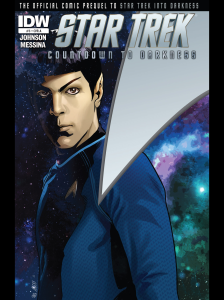 Leading up to Star Trek Into Darkness… Star Trek: Countdown to Darkness!

Perhaps little known, before each of the recent Star Trek reboot movies, there has been a prequel comic. I actually only recently finished reading the one for the first Star Trek reboot, so I’ll talk a bit about that comic as well. Then we’ll consider the original series, and some of its implications for this rebooted movie, to round out the source material.

Because the prequel comic definitely was not what the movie was about. Spoilers follow for Star Trek: Into Darkness! 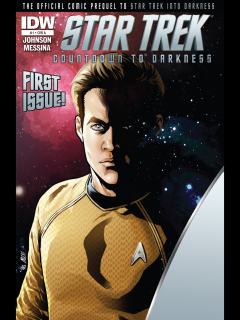 Star Trek: Countdown to Darkness is a four-part comic about a mission that the crew is on not long before Star Trek: Into Darkness. In fact, it’s the mission right before the one that the movie starts with, for what that’s worth.

The comic sets the scene for some of the tumultuous era that the characters are living in. There are Klingon incursions, Spock is a bit or a daredevil, Uhura is mad at him, Kirk disregards the Prime Directive when it suits him, these sorts of things.

Here’s the thing, and not really any spoilers here: all of these tensions and storylines are well introduced and handled in the movie. Really, basically, I needed none of this introduction to have any further or deeper experience of the movie. Kind of a waste of money.

It reminds me of another movie tie-in: Enter the Matrix. This video game tells the story of a couple of the characters who appear in the Matrix Reloaded, but who have a smaller part. Their journey is basically to be one step ahead of Neo, and to get shot down at every turn: They’re badasses, but not the One, so they can’t effect change. I was about to buy this game at a game store, and was told to just rent it by the clerk. And good advice: I beat it in very short order, and felt like I was playing the lame version of the Matrix Reloaded. This comic is kind of like that: a repeat of the themes of the movie, without resolution. 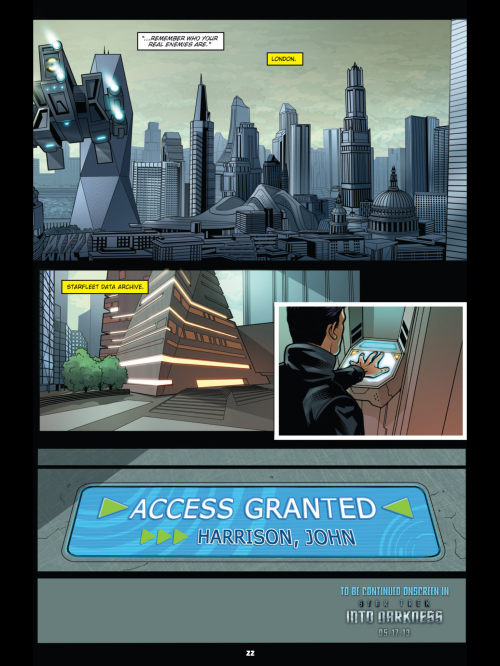 Look, it’s the last page of Star Trek: Countdown to Darkness, and the first appearance of John Harrison!

The comic does not give us any insight into the protagonist of Star Trek: Into Darkness, either. Actually, all it did was create an expectation in me that the Klingons were going to be a way more integral part of the movie than they were. Our secret Star Trek character in the comic is instead the original Captain of the Enterprise of their era, Robert April. He’s gone native, and is fighting the Klingons. Apparently. With no impact on Star Trek: Into Darkness.

You know how the Star Trek reboot left you with some questions? Like what was Nero doing in the past? Why did he have advanced weaponry? How was Romulus destroyed? And why did Spock have the most awesome, one-man spaceship in the universe, complete with fancy Red Matter which creates black holes?

I don’t know that I want to give you those answers. Instead, simply let me say that I know the answers to these questions, because I read this prequel comic series. We get a lot of insight into the events surrounding the time travel that underlies the plot, of the future of the Next Generation, of the demons haunting Nero. This comic adds a lot of depth to Star Trek, and I highly recommend it.

So mostly, it makes me all the more disappointed by Countdown to Darkness. They had done something so good, but they did not replicate it. So, after watching Star Trek: Into Darkness, I decided I wanted more source material to go on.

Some Other Source Material – The Original Series

Okay, here we’re definitely getting into the realm of spoilers – be ye warned! Or better yet, just go see Star Trek: Into Darkness!

Okay, so spoilers time. John Harrison is Khan, just like they claimed so much that he was not. I guess I’m glad they didn’t just say “yep, it’s Khan, we’re doing Khan.”

I was interested to see that they have all of Freakazoid on YouTube. Check it out here: http://www.youtube.com/playlist?list=PLDA0A754903C2BA11

I was happy to see, watching Wrath of Khan, that the movie was not completely repeated with Star Trek: Into Darkness. However, there were a few scenes where they were definitely tapping into it, and turning things on their head. Zachary Quinto’s epic man-scream rivals William Shatner’s – I wonder how many takes that took?

I also found some tie-ins from Wrath of Khan in Countdown to Darkness – the ship takeover, for instance. There are even tie-ins to Star Trek, with the Kobayashi Maru. Wrath of Khan is a major influence for the current Star Trek movies. Not actually very surprising. It’s the fan favorite.

But because it did not relate super closely, I decided to go back further – to Space Seed, the original episode with Khan in it. Here he is found, and awoken – something that happens off-screen before Star Trek Into Darkness – and takes over the Enterprise. He turns others to join him and work for him. This all also sounds like the work of this young Khan in Into Darkness.

However, after looking at the source material, I am happy to say, actually, that Khan is not like what came before. Well, he is and is not. They took the character, his motivations, super eugenics self, and story, and placed him into the world that exists in the reboot. He would be seen as needed in a universe that has seen crazy super-powered future enemies able to destroy whole planets. His being used by Starfleet fits in with their needs in this bold new world.

So I am happy to say that the reboot is keeping to its character of being related, but not slave, to what has come before. Hopefully you enjoyed it, too, and don’t feel like you’re missing too much – Benedict Cumberbatch is his own villain in this movie. So much so, that we almost sympathize with him – a dangerous thing, and something Khan would exploit.

3 responses to “Star Trek Into Darkness – A LitFlix”