When the Villain thinks they are the Hero – A Character Study 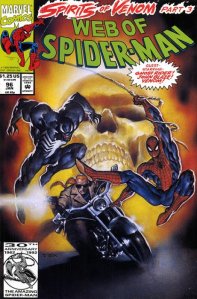 Apparently Google found this on http://comicbookrealm.com/report/comic-event/62/midnight-sons-spirits-of-venom On this cover, who is the hero and who is the villain?

Many villains are forgettable. Some just want money, or power, or control. Some had a hard knock life and are just taking it out on the world. Some men even just want to watch the world burn.

I explore three such villains here: one who does not necessarily think he is the hero but wants to be seen as such, by basically being his own villain; one who is the total and complete foil of the hero, and thinks fully that he is the hero; and one who spends the entire story stating again and again that he is the hero of the piece, and that you are the attacking villains. Read along as I explore Syndrome, Venom, and Handsome Jack.

Syndrome, or, seeing the Villain as a Hero

He approaches it in a fully villainous way. He kills a huge number of the heroes, who were in hiding, and so no one even really knew it was happening. So part of the plan is, when something bad happens, there is no one else who even COULD be the hero, except for him. Oh, and he doesn’t stop the Incredibles, whoops. Tactical blunder. It’s easy to be a hero when you know what the threat is, how to stop it, have gotten rid of all of the competition, and gotten rid of all of the opposition.

Too bad his AI was too smart.

So here is a villain who wants to be known as a hero. This is a bit of a contrast to the other two, however: he knows he is also a villain. He knows it is a ruse, but he doesn’t care. So he is not as psychotic as our next two villains, because of that fact.

Venom, or, What Happens When the Hero Turns Down Villainous Power

Okay, so I remember growing up in the 90s, that Venom was just the coolest villain. He knew all of Spider-man’s fears and weaknesses, who he was, who his family was, all of that. He had most of the same powers, except maybe even moreso. The art for him leaps from the page in its ridiculousness. He was a badass.

Then Spider-Man 3 happened. What had the potential to be the best of the trilogy turned into the emo-est worst of the trilogy, and made it so bad that the studio decided to reboot the series less than a decade later. Ouch.

No, really. Emo Peter Parker / Tobey Maguire is a meme. I especially like in this HISHE:

So anyway, Venom. Not quite like the movie, right? And not the current iteration, either, which is more of an anti-hero, government black-ops guy. But old Venom, after Spider-man finally escapes the symbiote suit. The suit really did probably make Spider-man pretty emo, but that doesn’t mean you have to translate that to the screen.

Venom fully believes that he is a hero and that Spider-man is the villain. This thought transferred so much from Peter Parker to the suit that it lives on in Venom. And it brings Spider-man into such stark relief: he had better be heroic, or Venom will be right.

One of my favorite comic story arcs growing up was the Sprits of Venom crossover, which brought together hero Spider-man, anti-hero Ghost Rider, hero-villain Venom, and villain Hobgoblin along with more for them to face. It created such an interesting dynamic between the characters, especially with Ghost Rider opposing Venom. Also made for some great art.

Not to do any spoilers, but with the recent results of Amazing Spider-man #700, the will of Spider-man to be a hero runs so strongly, is such an integral part of Peter Parker, that he passes it on to others. And it has happened again in the new Spectacular Spider-man. I am interested to see how long they carry that on.

Oh man, if there is a villain that we love to hate, and who has taken the geek community by storm of late, it’s Handsome Jack in Borderlands 2. He lords it over you throughout the game, is willing to do anything at all, and is just generally a bad dude.

But he also spends the entire game calling himself the hero.

As you go through a game already dripping with questionable morality, not fully heroic yourself, there is a character calling you out as a villain. Who does… Well… I think I’m going to have to go with spoilers. Be warned!

If you don’t know, yes, he named the diamond pony “butt stallion.” And yes, it’s a pony, made out of diamonds. Found on http://www.t1gn.com/top-villains-of-2012/

Okay, Handsome Jack. A man who built his own daughter into a machine, turning her into the satellite which ran and policed a whole world. It’s kind of like the bring-your-daughter-to-work day that would never end, as Jack keeps his daughter looking for dangers and manipulating people.

From some of the back-story bits you find, it sounds like Jack was picked on at work, overlooked, then something awful happened to his wife, possibly with him as the perpetrator… He kills his boss, takes over, and makes himself a heroic figure for robots and the engineers who work with them. Not of other live people you see from Hyperion in Borderlands 2. Easy to be the hero of robots you program to work for you.

Jack is still, through it all, psychotic enough to believe that he is the hero, and you are the wild, vagrant bandits who are there to destroy the utopia he is building. Never mind that I don’t know if anyone would live up to the standards he would want for people to live in said utopia – he was going to build it, and we messed it up. He had a peaceful world – peaceful because he was working on killing all of the opposition by shooting robots at them from space – and we’re the ones who go and throw off the balance of power. We’re the villains.

(Except we’re totally not, Jack. And it’s only because of you that we really get to be heroes).