Death of Feminism and Lewis’s Law

So this is kind of a supplemental post to my Damsels in Distress post because for some reason after watching the video from Feminist Frequency and watching some of the responses YouTube decided to recommend some other videos for me. The subject of these videos all touched on the point of feminism being irrelevant, feminism being too extreme now, and why someone chose to not identify as a feminist anymore.

During this same time I also read this amazing post by Laura Hudson on her Tumblr discussing why she feels that it is important to still identify as being a feminist. The interesting thing about her article is the fact that her response partly stems from an article on Salon discussing famous women who do not call themselves a feminist. So after hearing from the various sides I wanted to just put my two cents in.

I Am a Feminist

First, let’s just start this off with the fact that I do call myself a feminist. Personally I think I might have to reject my degree from Scripps College if I don’t call myself a feminist, but it is actually a concept that I believe in. Now some of the discussion has been about the feeling that feminism has changed and I agree it has changed, but some of the problem is that with a lot of movements or beliefs the definition has become somewhat blurred and potentially splintered. According to Wikipedia:

Feminism is a collection of movements and ideologies aimed at defining, establishing, and defending equal political, economic, and social rights for women.[1][2] This includes seeking to establish equal opportunities for women in education and employment.

Now, this definition is definitely one that I can get behind. I think the movement has done a lot to get equal rights and opportunities for women over the years. Some of the places that I really see progress needing to be made is in media (books, comics, movies, tv, video games).

Let me start by saying (again) I do not believe that pointing out that something might be problematic is saying it is bad, but that maybe we need to question why something is the way it is. As a geek / nerd and a feminist I have noticed that there seems to be a vocal group within the geek / nerd culture who really hate the idea of geek feminism. There seems to be this feeling that the feminists are trying to ruining everything that is fun. At the same time there are way too many examples of geeky women being treated differently or being harassed because they are women. Here is a just a few articles that I have read recently discussing this issue:

These examples illustrate the problems that women experience in these spaces. It is interesting where people talk about how feminism is not as needed now-a-days and yet you have people creating a game to punch a woman in the face for daring to question gender roles in video games. It is not like any of this stuff is sacred. Some of it does come down to the fact that when we like something we want to defend it. We identify with the things we like and if you are making a comment about that thing then we transfer that comment to ourselves.

In the end though we are not the things we like and we can still like them while recognizing larger issues that might be present. The reason I still call this feminism is because I do feel that the way women are represented in media is problematic. The perfect example of the issue though is Lewis’ Law: 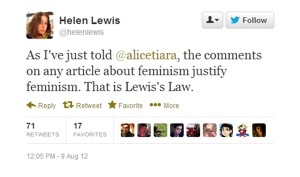 8 responses to “Death of Feminism and Lewis’s Law”