A Character Study of Arya Stark 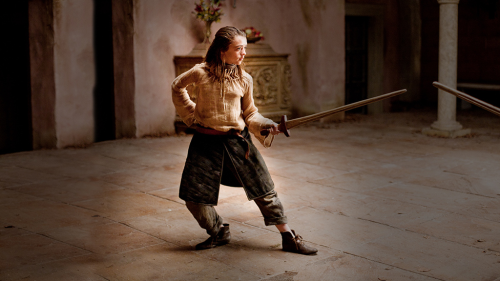 Not only is she resourceful, quick on her feet, and fighting against the standards of society, but she has an amazing story. In the world that Georg R.R. Martin has built the gender roles are very much based on the medieval structure. Upper class women stayed at home with their children and learned to cross stitch, play music, but they are not meant to wield a sword and fight. Arya is the daughter of Ned Stark Lord of Winterfell and she does not fit in to the world of upper class women. While her sister Sansa flourishes at the idea of dances, house parties, and pretty dresses. All Arya wants to do is be able to practice with her brothers.

The other reason I love Arya is I relate to her. There have been so many times I have felt out of place with “girlie” things and would much rather be doing what the “boys” were doing. Even with all of the gendered issues with Game of Thrones I think George R.R. Martin does a great job creating diverse, interesting strong female characters who women can look up to and relate to.

When we are first introduced to Arya in the book she is sitting with all the other fine young ladies practicing their stitching. While Sansa seems to be doing it perfectly Arya stitches were crooked and there does not seem to be a way to fix it. Instead of helping her or encouraging her she gets ridiculed and even laughed at. It hurts her like it would hurt anyone, but instead of just breaking down, she begins to storm out of the room, so they do not get to see her cry. The Septa who is a sort of nanny and tutor yells at her for leaving, especially because they had royal guests and because storming out is considered unladylike.

Now at this point Arya could have gone and sat back down, but instead she thinks on her feet and both uses what she knows and makes a joke to boot.

“Arya stopped at the door and turned back, biting her lip. The tears were running down her cheeks now. She managed a stiff little bow to Myrcella. “By your leave, my lady.” Myrcella blinked at her and looked to her ladies for guidance. But if she was uncertain, Septa Mordane was not. “Just where do you think you are going, Arya?” the septa demanded. Arya glared at her. “I have to go shoe a horse,” she said sweetly, taking a brief satisfaction in the shock on the septa’s face. Then she whirled and made her exit, running down the steps as fast as her feet would take her.”  – Game of Thrones

She knew the proper protocol to use by requesting leave of the higher ranking official in the room, but at the same time had no intention of sticking around in a situation where she is just to be ridiculed. The reason her comment about shoeing a horse is so scandalous is because it is definitely not something the young lady Stark should be doing. In many ways her comment speaks to how she feels in her current position. She just does not seem to fit in her current situation. At the same time her situation changes dramatically.

Arry, The First of Many Names

Ned Stark has always been understanding of Arya’s rebellious ways to Lady Catelyn’s chagrin. When the family is half relocated to King’s Landing when Ned becomes the Hand of the King, Arya is particularly miserable. I can only imagine how she felt being thrust into this world where appearances have become even more important. Ned takes pity on her and gets her a teacher to learn to sword fight. Arya takes to learning to fight like a fish to water. She loves it, she is chasing cats, figuring how to be still and silent, how to be quick, and learning what it means to fight with a sword. For once she seems to be excelling at something, but alas as with all the characters in the Game of Thrones things never seem to turn out for the best.

When Ned Stark is betrayed and convicted of treason Cersei Lannister tries to have Arya captured. Luckily they come for her while she is with her teacher and he has taught her well. She is able to escape and get out of the palace. She sneaks around King’s Landing for a time, but eventually Ned Stark is killed for treason. Arya is grabbed by one of the Night’s Watch who is in town collecting recruits. He cuts her hair and calls her Arry. Arya is distraught, but she knows how to survive and she takes up the new name and starts on her way out of King’s Landing.

This is only the first time that Arya learns to adjust and adapt. Even when circumstances  seem dire and things are going to hell, she figures out how to survive. Arry is just the first of many personas that Arya takes on as she adjusts to her circumstances. At first she tries to get home, but eventually she finds a larger goal and purpose. Her desire to meet this goal is so strong she is willing to, figuratively, walk through fire, and potentially lose herself to achieve it. I am excited to see how Arya’s story plays out in the show and I cannot wait to see where she will go in the series because I think she is going to be fantastic.

It is so difficult to talk about how wonderful Arya is without giving too much away, but early on in the story we see how amazing she is. She breaks traditional gender roles and often takes on the disguise of a boy if the situation calls for it. She knows how to adapt and survive in a world where men are considered the dominant gender. She understands what it takes to survive. She never allows herself to be overwhelmed by her situation, which many people would have been. Faced with death at every turn if discovered would be difficult for anyone.

What Arya goes through is truly amazing, even when she does not quite fit in, she does not let anyone make her less. Now I do believe that Ned does amazing things with her by encouraging her more unconventional interests. At the same time it is Arya’s tenacity that keeps her alive and keeps her moving. Of all the characters in the Game of Thrones I definitely relate to Arya the most. There have been times I have not felt like I quite fit in with my family, but at the same time just like Arya we would do anything to protect them. Arya is finding the skills to protect the people and things she cares about, but at the same time it might require her to sacrifice some of herself to acquire those skills. It is a difficult choice to make, but in the end I know she will be amazing.

7 responses to “A Character Study of Arya Stark”