I re-tweeted this, but I thought I would expand on it. My favorite author is Peter David, author of a great many things, quite a bit of which I have read. I thought I would share a bit with you, to give you some reading ideas that can also go towards a great cause!

So I have a couple of recommendations that come from different areas: Marvel comics, Star Trek, the Dark Tower, and Arthurian legends. Check him out! Plenty of his work available on the Marvel app, as well as Amazon. And if you buy them on Amazon, make sure to do so by clicking through the link to Amazon from Peter David’s blog!

To start with, I was working on finding something new for me to read from Peter David, and after reading the blog post of ideas, and buying all the E-pub books (haven’t read them yet, but I bet they’re fun), I followed the advice of buying some things from Marvel. They recommended X-Factor, so I gave it a look.

In my mind, X-Factor was a sideline to the X-Men. The original series started up once some new (and super popular) X-Men were added in Giant Sized X-Men #1, and the lineup became too large for one comic. So the original X-Men formed X-Factor. But wait! This is X-Factor Volume 2, and Peter David has been writing it since its beginning in 2005. 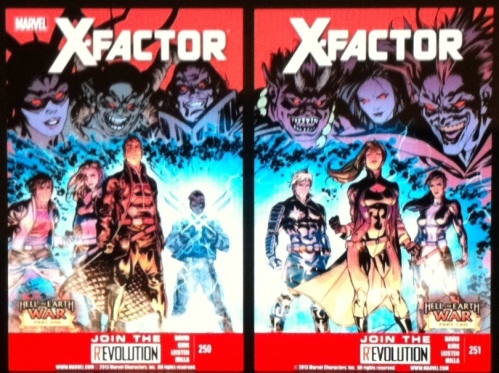 In this new iteration, X-Factor is an investigative group of mutants, led by Multiple Man. I’ve bought and read X-Factor 250 and 251, as recommended, and indeed, this is a good starting place. The characters are all together, having to be introduced to a new character, who is also the crux of the plot. I am, however, contemplating the whole series going back to 2005, because it’s all on the Marvel app. Now I have another monthly comic to follow!

Plenty of people have written Star Trek novels. There’s a bunch, about all sorts of topics, from all of the series. In general, most of the books are even part of the canon of the series. However, few authors got to really write books that delved quite so deeply into the characters and series as Peter David. Peter David got to write some of the main books involving the Borg, Q, and the idea of Imzadi which ties together Riker and Troi.

However, taken one thought further, few authors were given their own ship to write about, and an ongoing series with an invented crew. But Peter David did. Enter Star Trek: New Frontier. If you are a Trek fan, and have been missing a good Trek show, try a good Trek novel series. The crew is great, the plots are great, and it is a great representation of the humor that I love so much in Peter David’s writing!

The Dark Tower is Stephen King’s fantasy (Sci-fi? Horror?) epic, and it may have seemed done a few years ago. But people have been delving back in – including Stephen King himself, who wrote book “4.5” in the series. 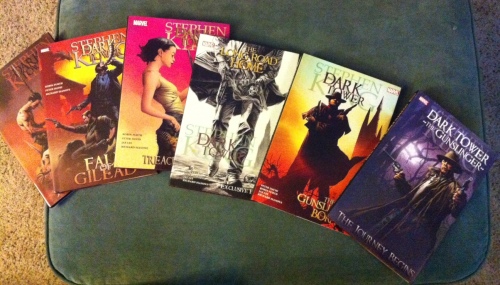 A comic prequel series has been coming out, as well, and is being penned by mister Peter David. Not quite representative of Peter David’s own writing voice, it is instead interesting to have him working on capturing the voice of Stephen King, and his characters. Still, for exploring both the main villains, and the long gone past characters of the series, this set of graphic novels is a great addition for the Dark Tower fan.

I love the Arthurian legends, and one of the most amazing books I have ever read is The Once and Future King. I will definitely read more of the legends, my next plan being The Mists of Avalon. Most authors go back and are re-telling the tales at the time, of Camelot. However, if Arthur is the Once and Future king, then what does that look like in the future? Peter David explores the answer to that.

King Arthur comes out of the crystal caves in modern New York – and runs for mayor. And things go from there. There is a three book series of Knight Life, One Knight Only, and Fall of Knight. I could add more spoilers, but I want you to read these. If you like Arthur, you’ll love this modern re-imagining.

Want to learn more? Check out this blog post for some ideas: http://www.peterdavid.net/2013/01/16/how-you-can-help-peter-david-recover/